Another school year is over. My daughter and my eldest have finished their first year at their new grammar school, and my younger son has completed year 9 at his grammar school. So how has this year been?

My daughter has made a brilliant start to her secondary school life. She absolutely loves her school and settled in instantly. She has made a great group of friends and is also popular with everyone else in her year too. She even enjoys the school bus and seems to have a great bond with the driver! What more could you ask for?

Academically, she was never going to be top of the class at a selective school, but she’s done really well. She’s above average in most subjects and came top in her French and art exams (strangely, two out of the three subjects I did for A Levels). She is well-liked by teachers and always happy to answer questions in class. She has a lot of homework and always completes it to a high standard.

Her sport got off to a shaky start – when she didn’t make the netball team (not surprising as she’d never played at primary school), she stopped going to practise. But she stuck with rounders and played several matches with the B team. She now has the confidence to give netball another try next year.

My daughter was disappointed not to be cast in the school play, but was very grateful for the support the school gave her with panto (sadly they won’t need to support her in year 8). She also performed a beautiful piece of her own choreography at the school’s song and dance evening.

We couldn’t have asked for a better year 7. 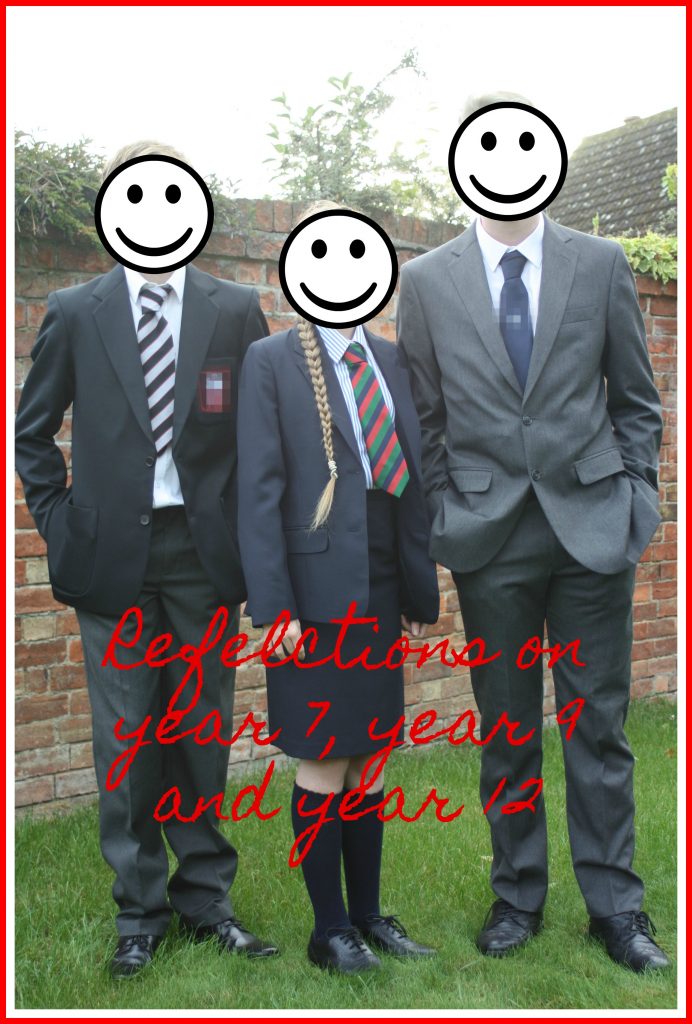 My younger son has continued to flourish both academically and in sport in year 9.

Year 9 was the year he stopped having all of his lessons with his form and started having them in mixed groups. He wasn’t keen at first to be separated from his best friends, but he soon adapted. He ended up in one of the two second set maths groups, rather than one of the two top set maths groups for year 9, due to a lack of revision at the end of year 8.

All through years 7 and 8, he was above expected in nearly all of his subjects – and that’s expected for a highly selective grammar school, not for your average student – and that continued for year 9. He put in a little bit more work for his year 9 exams and came out with some fantastic results. He got 7s for most of his exams (that’s a GCSE A in the old money) and 8s for a couple of them (that’s a GCSE A*) – not bad considering he’s not actually doing his GCSEs for another two years. He even got 6s (B) in the subjects he didn’t revise for and doesn’t intend to do for GCSE! His little bit of extra work means he will be in set 2 for maths for year 10, which is the equivalent of one of this year’s top sets.

He has had another brilliant year of sport – improving in rugby, becoming the team’s top scorer in their first season of school football and smashing his long jump PB by over a metre, going on to represent the county at regionals. His hard work earned him two players’ player awards for the year.

And so to my eldest. My son has flourished in the 6th form of a girls’ grammar school and has absolutely no qualms about making the move.

He has made lots of friends and has been free to embrace the quirkier sides of his personality, which would have been frowned on by the ‘cool’ kids at his old comprehensive. The boy who has always shied away from responsibility and getting involved in anything extra-curricular is now a house captain. To see him organising a sports day team and taking part in sports day, even though sport is not his thing, has been a revelation.

Academically, he’s doing better than he would have done at his old school. I think he will come out with grades at least one grade higher than he would have got there. He’s doing really well in one subject and pretty well in another. He just needs to bring his third subject up to speed. He doesn’t mind reminding us that he got the ‘second lowest GCSEs in the year’, but we hope he won’t get the second lowest A Levels (or the lowest).