It’s been a couple of months since my daughter did her Bronze Jazz exam and we’ve been patiently waiting for the results. To be honest, we’d almost forgotten about it because our lives have moved into panto mode and everything else gets put on hold or forgotten for the best part of two months.

I was pretty sure my daughter would get distinction in her exam. She really is a beautiful dancer. She has it all – energy, grace, enthusiasm, control. Her moves are sharp, her head is always up. As a dancer, people are drawn to her. They can’t take their eyes off her.

There had been a blip a few weeks before the exam when she’d had to miss a few lessons and some practise at home because of an injured foot. When I spoke to her teacher about it, she told me she thought she had nothing to worry about – and the tone of her voice suggested she didn’t just have nothing to worry about, but that she would totally smash the exam.

So did my daughter maintain her 100% record of getting distinction? To date she has got distinction in Grades 1, 2 and 3 in ballet, Grade 1 in tap and Grade 2 in modern. That’s all the exams she has ever taken.

Of course she did! We heard the good news about a month after the exam, but we didn’t have the detail, just that she’d got the result. From discussions in class, my daughter also picked up that, once more, she was the only girl in her class to get distinction.

We finally got the report last week. She got nine out of 10 for her knowledge of the syllabus, her jazz technique and her use space, and eight out of 10 for all of the other sections. Overall, she got 83%.

The threshold for a distinction is 80%. There was a time when she would have considered 83% ‘scraping’ a distinction, but now she realises it isn’t. 83% is actually four marks into the distinction category and distinction is described as ‘Reflects a high to extremely high standard of achievement’.

Well that sounds like something to be proud of to me! Not bad for a girl who does around 20 minutes of jazz a week (her jazz class is a 45 minute joint jazz and tap class).

Once again, I am in awe of my amazing daughter and her dancing. 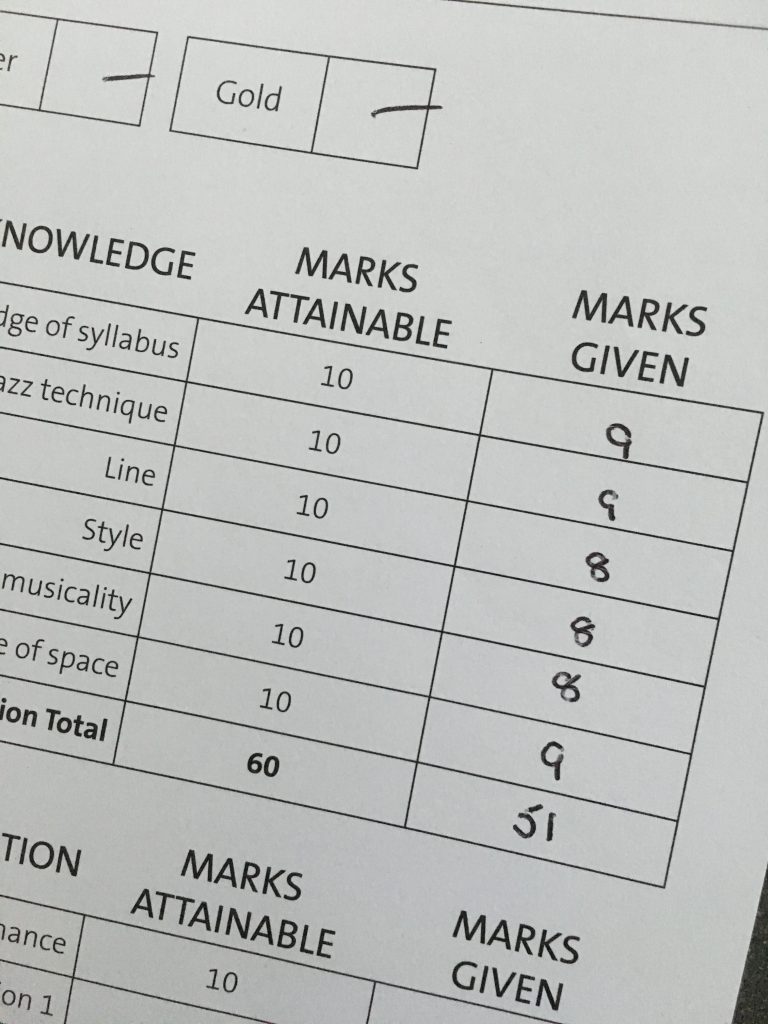