Getting the first pointe shoes

Getting your first pointe shoes is a really big deal for a little ballet dancer, and my daughter was no exception.

Most little ballerina’s mums were also ballerinas and know this stuff themselves. Me? I failed a modern exam at the age of 7. Yes, I’m that bad. So I have no idea about pointe shoes, other than a lot of rumours.

I knew they were VERY EXPENSIVE. Over £100. Also, I know that, at 11, my daughter has just started her growth spurt and still has a lot of growing to do. She will need more of those VERY EXPENSIVE shoes. I knew that fitting them took hours. Probably two hours in the shop.

We have a shop locally that does pointe shoes. They are one of the only things in this day and age that can’t be bought online. They have to be carefully fitted to the foot, because if they’re not, a lot of damage can be done to the feet or ankles. Ballet dancers need to be very strong before they can go up on pointe.

You can’t just turn up to the shop and buy your pointe shoes, you have to make an appointment. So, after the ballet teacher had given us the news that my daughter was ready, we made an appointment for the end of the summer holidays. We told the lady my daughter’s shoe size was a 4 and a half. She was very happy to have finally grown after being around a 3 and a half for about 18 months.

But school shoes have growing room. Pointe shoes have to be tight. She was a 3 and a half in pointe shoes. There are slightly different styles and shapes. The lady found the right style of shoe for my daughter’s foot, but didn’t have it in the right size. She tried it in a larger size, held on to a shelf and went up on pointe. To me, it was a truly magical sight. After waiting for this moment for so long, I don’t think my daughter could believe she was actually up on pointe.

But we had to wait another week until the right shoes came in.

These shoes fit like a glove. And when my daughter went up on pointe again, she didn’t feel the pain in her toes she’d felt the first time. 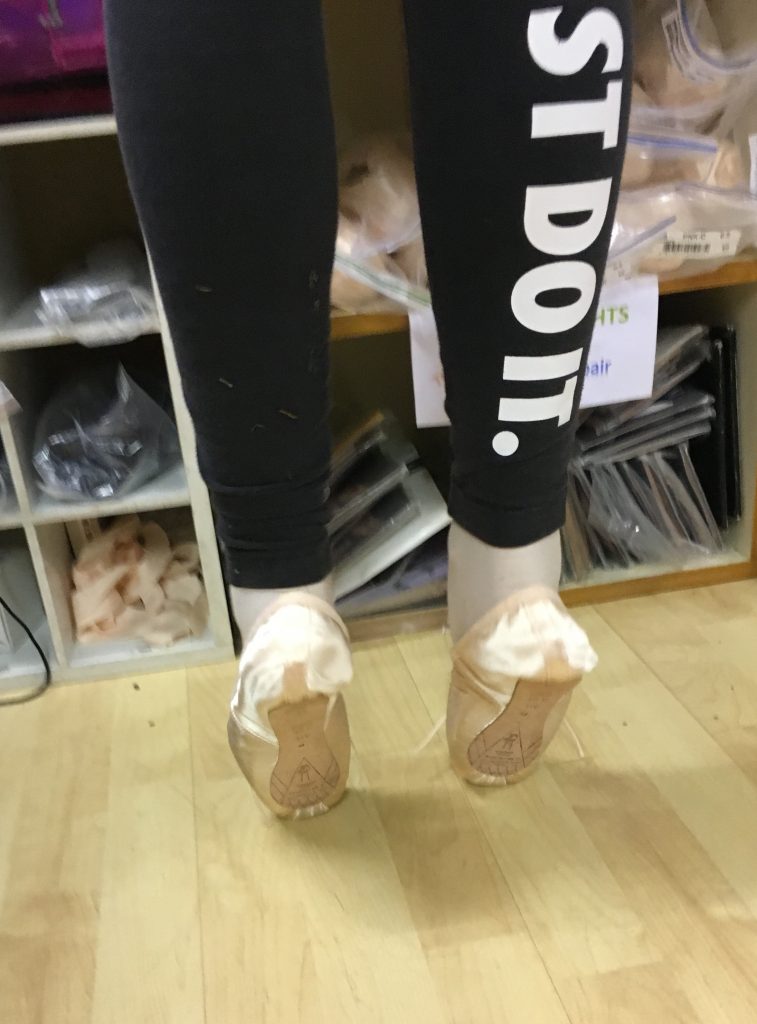 We weren’t in the shop for the mythical two hours. We were barely there 20 minutes.

The shoes as you buy them are not the shoes you picture in your head. They don’t have ribbons on them. You have to sew the ribbons on yourself. The lady showed us exactly where and how they need sewing on, then exactly how you tie them. The ribbons aren’t for decoration – they hold the shoe on and support the ankle. 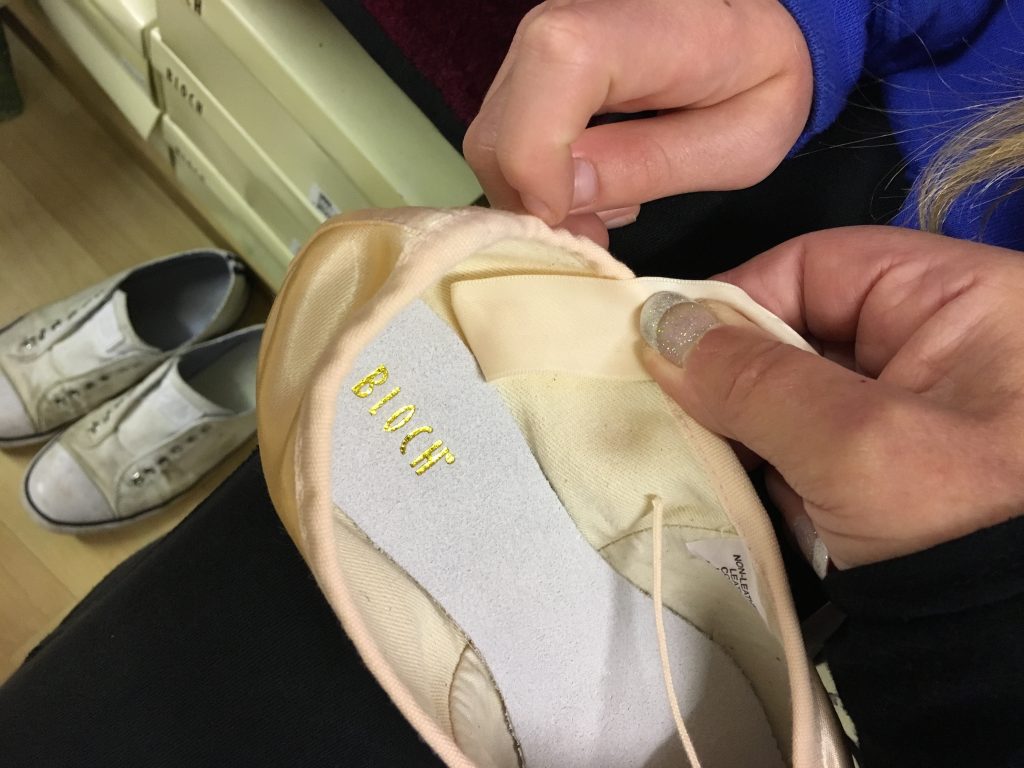 I can’t sew to save my life, so at this point I was quite scared. My daughter is interested in sewing and has done a tiny bit with my mum’s help, but sewing a ribbon on some pointe shoes in exactly the right place?! That was a different matter!

And the sewing doesn’t stop there. Apparently the shoes have to be ‘darned’. And darned doesn’t mean mended like a pair of socks, it’s some stitching you do on the front of them to reinforce them.

‘But don’t do it all at once,’ said the lady. ‘Don’t do more than an hour and a half or two hours because you will hurt your fingers and then you won’t be able to do your schoolwork the next day.’

Now I was even more scared.

A friend tells me my daughter should wear the shoes four or five times for the satin to loosen a bit before we darn them. So we haven’t tackled that yet. My daughter’s teacher likes the girls to do the sewing themselves, but some Grandma input and a YouTube video will definitely be needed!

The shoes themselves were £57.50, but after we’d bought some soft toe protector things (I don’t know the actual name of them), plus ribbons, thread and curved needles, it came in at just under £100. The good news is, next time we will only need to buy the shoes and the ribbons as everything else can be used again. And, as my daughter is only 11, you can guarantee that ‘next time’ will come around pretty quickly. Although the lady in the shop gave us a tip for squeezing an extra quarter size out of them, so hopefully they can last the full school year.

My daughter couldn’t wait to get her shoes on, although I was slightly terrified. She used the breakfast bar as a barre, before taking a few tentative steps in them. She looked amazing, but I was worried about her doing it without help from the teacher.

But it’s happened, my little girl is officially on pointe! 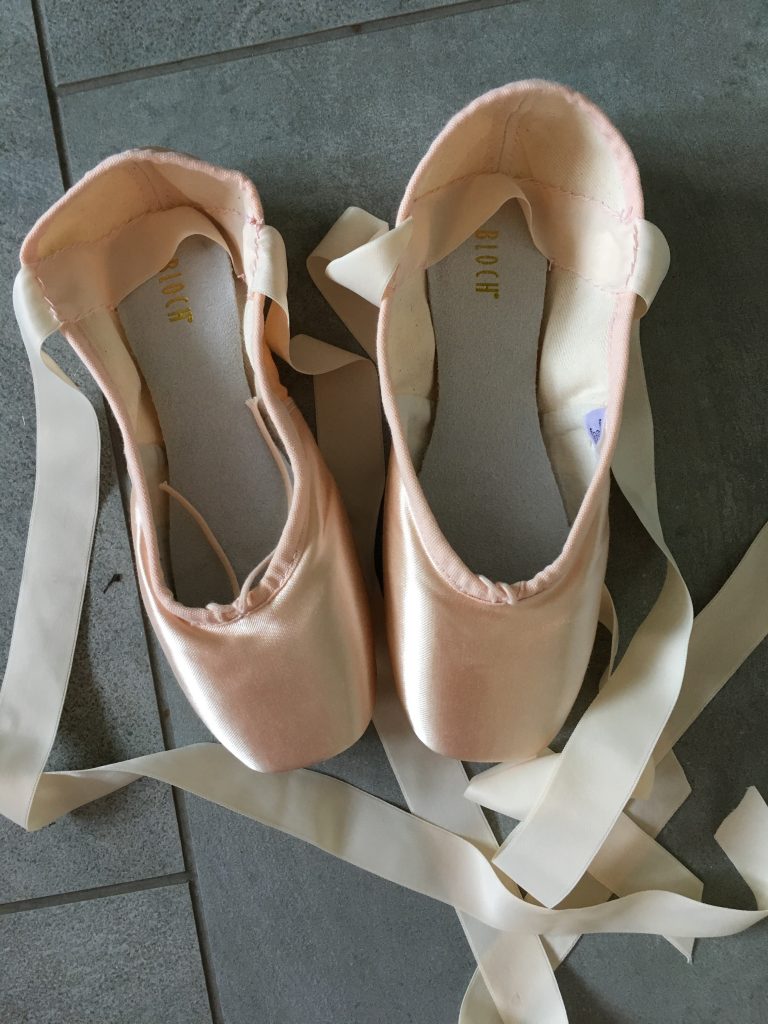