Going to the circus with my daughter

Home » Family » Going to the circus with my daughter

Ever since she read her absolute favourite book in the world ever, Hetty Feather, my daughter has wanted to go to the circus. Yes, she’s 11 and she’s never been. What a cruel mummy I am.

Circuses come round our way a couple of times a year, but going to them has never been a priority. Going to the circus requires the two things we don’t have an awful lot of. Time and money. Having big kids is like standing over a drain with your wallet open and just chucking all of your money down there. There’s dance lessons and school trips. There’s always someone who has grown out of his school trousers or got holes in his trainers (both boys in the same week recently).

Both of my boys had been to a circus when they were little. I have vague recollections of standing outside the big top in the middle of the performance because one of them had got scared. Maybe that’s why we never took my daughter.

But then the Moscow State Circus came round and she brought a voucher home from school for half price tickets. We were going to the circus!

Needless to say, my husband questioned the expense and the point in going. But surely my daughter should occasionally be able to do something she wants to do? Something which isn’t some form of sport (which is of course the only thing we really do)?

You could get ‘side view’ tickets pretty cheaply – so it was £17 for the two of us. Not exactly expensive.

My daughter really didn’t know what to expect. Her entire experience of circuses was based on the Hetty Feather books, which are both fictional and set in Victorian times. What would a 21st century circus be like? 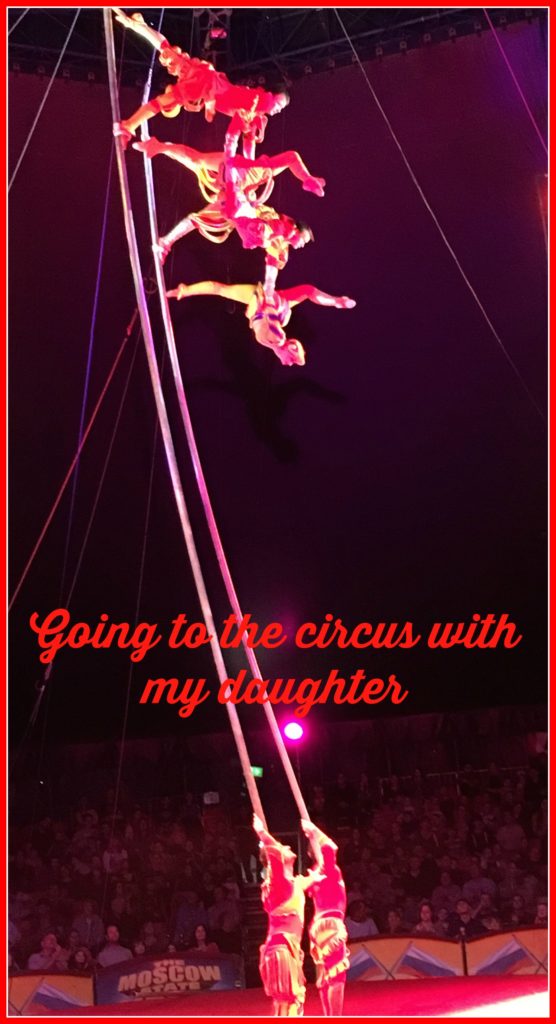 It turns out that it was brilliant! It started off good and it got better and better.

It had a hotel theme, with a male and female clown checking in all the ‘guests’ (the other performers) to the hotel at the start of the show.

The trapeze artist was good. My daughter was amazed by her skill. But then came a troupe of four men and three women dressed a bit like medieval jesters. The men balanced very tall poles on their heads and the women climbed them and did tricks on top of them. That was astonishing! Especially when all three women climbed the same pole. How is that even possible?

There was the unicycle rider, who went from a standard unicycle to just a wheel and then a very tall unicycle. He skipped on his unicycle, he jumped from one wheel to another and he rode around with his glamorous steampunk assistant hanging on to it.

In the interval, I asked my daughter if the circus was as good as she’d hoped it would be. She’d been wanting to go to one for so long that I was worried she might have built it up too much in her imagination.

The second half kicked off with the truly spectacular tightrope walkers – three women and two men. It started with a bit of general walking up and down, before moving on to things like a man walking along the tightrope with a woman DOING A HANDSTAND ON HIS HEAD. This was followed up by a man walking the tightrope with another man standing on his shoulders and a woman standing on his shoulders. The whole thing was truly spectacular.

But the side view gave us the absolute worst possible view of the tightrope. The rock-bottom price ‘rear view’ would have given us a better view.

The show finished off with a troupe of male acrobats swinging and performing somersaults very high in the air and landing on the opposite swing. Each trick got progressively more spectacular and dangerous than the last.

The level of skill at the circus is quite incredible, but it’s enhanced by the level of performance too. All of the moves are immaculate. It’s like watching Olympic gymnasts combined with professional ballet dancers.

We absolutely loved the circus and I’m pretty sure my husband and sons would have loved it too. Next time it comes around, I’m going to take the whole family. And I’m going to splash out for a ‘front view’. 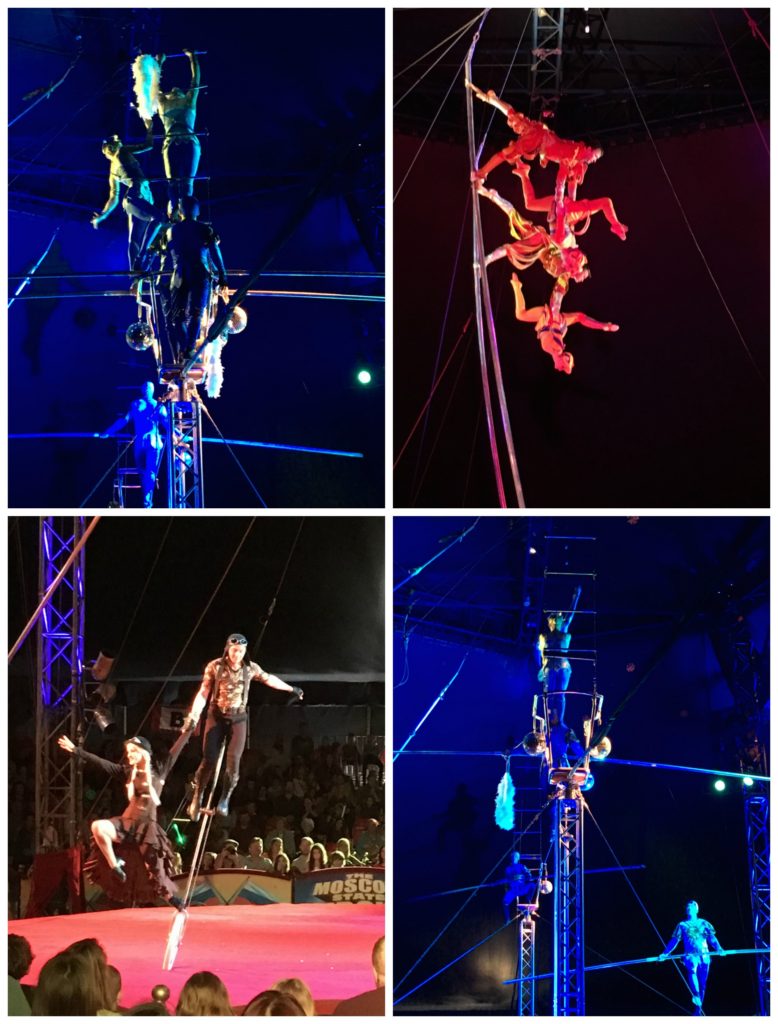