Talking to my daughter about puberty

Home » Family » Talking to my daughter about puberty

I’ve been meaning to talk to my daughter about puberty for nearly 18 months now, but somehow it just didn’t happen. We were always busy and it was hard to find time, as well as space where we wouldn’t be interrupted by the boys. But she’s 11 now. I really needed to do it.

Of course my biggest fear was that she would start her periods and would have no idea what was happening. But I didn’t actually think that would happen. While puberty has definitely started, I can see that she’s some way off starting her periods. Plus I didn’t start until I was 14, so I guess she will be a similar age.

I bought a book, Ready, Set, Grow! by Lynda Madaras, to help me with the all-important talk way back in November 2015. It reminded me of lots of things I wouldn’t think of – like BO, putting on weight and body hair. I would probably have only remembered periods, boobs and getting taller.

Over the Easter holidays, I knew I had to bite the bullet. And the planets worked in my favour. Both boys went out with their friends at the same time on the same day. We could have peace!

In an ideal world, I would have made it ‘special’, but how? Not being able to plan because of the boys always being around, we just sat together on my bed and went through the book. It was very useful to me to have prompts.

The book told me (and my daughter!) that puberty takes about five years. I wouldn’t have known that. It had useful diagrams showing the progress of breasts, which apparently takes three or four years in total. I read in a blogpost recently that girls should be offered crop tops from the age of 9 or 10 to help them feel more comfortable with their growing breasts. Of course I had never thought of this. As the mum of two boys, I always feel I’m playing catch-up parenting my daughter. I asked her if she would like crop tops and she said she would. I think a bra will be a year away yet.

We think my daughter has started her growth spurt – certainly she seems to be growing out of her clothes quicker than she used to. The book reminded us of the importance of a good balanced diet and exercise to help growing bones. We’ve seen from my eldest just how much food a child needs when going through their growth spurt (loads). My daughter has got the exercise bit right, but she knows her diet isn’t quite as balanced as it should be.

I hadn’t really considered the weight a child puts on during puberty, but it makes sense that they do, because they transform from child shape to woman shape. My daughter has spent a lot of time with older girls at the panto and in her ballet class and knows they are a different shape from her. The book says a girl will put on around 3 stone over the course of puberty, which sounds rather a lot. But, actually, my daughter is 6 stone and I’m 9 stone, so it’s just the difference between child size and adult size. Of course the weight isn’t all boobs and hips, most of it is just down to sheer height.

We’ve noticed that my daughter’s hair is getting greasier these days and I’ve told her she will have to start washing it more often and showering every day when she goes to secondary school. It’s useful to have the book to explain why and to tell her that it’s normal.

I genuinely didn’t know if my daughter knew anything about periods, as I know they don’t do the sex education talk at school until the very end of year 6, but she said she knew a bit. There are a couple of girls in her class who have already started and have told her about them. We talked about the purpose of periods, how long they are likely to last, that they might hurt a bit and the protection to use. We agreed we would keep a couple of sanitary towels in her school bag from when she starts her new school. I never did this as a child, so it was lucky I started first thing in the morning before school!

I haven’t given the book to my daughter yet, I will wait until after she’s had the talk at school. My friend told me there were bits in her book she wasn’t comfortable about sharing at this stage, so she covered those pages up! That’s kind of how I feel too.

The main message I gave my daughter about puberty was not to worry – about periods, boobs, body hair, weight or anything else. I’ve told her she must talk to me if she’s worried about anything and I will always listen to her and always be there to help her.

My daughter took it all very well. The only thing she didn’t like to talk about or think about was body hair – I think it was an ‘amusing’ picture in the book (of someone completely covered in hair) that slightly upset her. Knowing what grooming to do and when will be a question for a later date.

I’m so glad I finally got round to having the talk. Maybe I should have done it a bit earlier, but it was useful that my daughter already had a bit of knowledge. I think we are both feeling happier about puberty now. 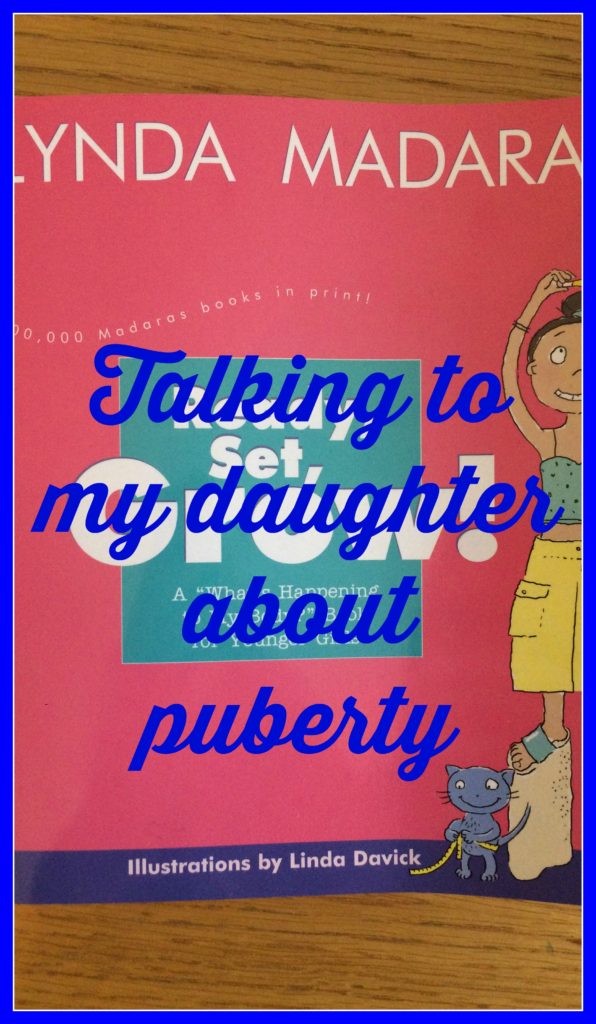