My younger son is a lovely boy. He has a very likeable personality and a good sense of humour. He is highly academic and a natural sportsman. He’s the kind of boy anyone would feel proud to call their son. And I’m VERY proud to call him my son.

But, last year, I realised something. Somewhere along the line, we’d taken our eye off the ball with him . Without the expectation to help out of the eldest child in a family and without my daughter’s natural inclination to help out, he’d slipped under the radar. My lovely son was actually rather inept. He couldn’t even put the oven on. He apparently didn’t know which of the two oven-like things in the kitchen was actually the oven. How? How could he not know?

In addition to that, the boy who’d always eaten anything and everything, the boy with the very fussy brother and sister, was suddenly as fussy as they were. Fussier even. I’d been too busy worrying about them and had let him slip into fussy ways himself. Suddenly all he really wanted to eat was chicken, cereals and biscuits (not all at the same time).

Feeding my kids is always a trial for me. I’m always racing around to dance lessons and we often have two or even three sittings. Add the fussiness and the fact that two of us are vegetarian into the equation and we rely far too heavily on the freezer in the week. Once a week I make my ‘speciality’ ie the one proper meal I can actually make – spaghetti bolognese.

And my younger son moans about it.

Every day, he comes home from school hungry. Every day, the first thing he says is ‘What’s for tea?’. But he never likes the answer and he never comes up with any alternative suggestions.

Then one day he did.

‘We could have chicken stir-fry.’

My son has been thriving at his new grammar school. He takes everything he learns on board. He has an enthusiasm for things I never would have dreamed he could be enthusiastic about, like German and Art.

I know how to make stir-fry. You just chop up vegetables (badly), chuck them in a pan, get a bit distracted and burn them. This is what I eat most days. But my son had learned how to make it properly. And he needed proper ingredients.

So we went shopping to buy the ingredients, just the two of us. Even this was a pleasure in itself. I rarely get one-to-one time with any of my kids, apart from the time spent with my daughter driving to and from dance lessons.

We were going to be buying the exact same ingredients he’d used at school – ginger, garlic, chillis and pak choi.

I was extremely impressed by the way he chopped his onions, the way he insisted on separate chopping boards for his vegetables and his ‘smellies’, as the teacher called them, and the way he tidied up after himself. He chopped and grated and then he started cooking. He knew exactly how long to cook for before adding the next ingredient. He knew how to cook the chicken until it was safe to eat. And all from memory.

And I was in awe. A couple of Food Science lessons and he was putting my 23 years of cooking for myself to shame. I’ve never been taught to cook, neither at school or at home, and I’m still playing catch-up now.

His stir-fry smelled delicious (as a vegetarian, I had to make my own similar, but different version) and apparently it tasted delicious too. As an added bonus, my boy who doesn’t eat vegetables ate onions, peppers and pak choi. Pak choi! A green vegetable.

So maybe my boy isn’t so inept and he isn’t so fussy. He just needs school to remind him of that! 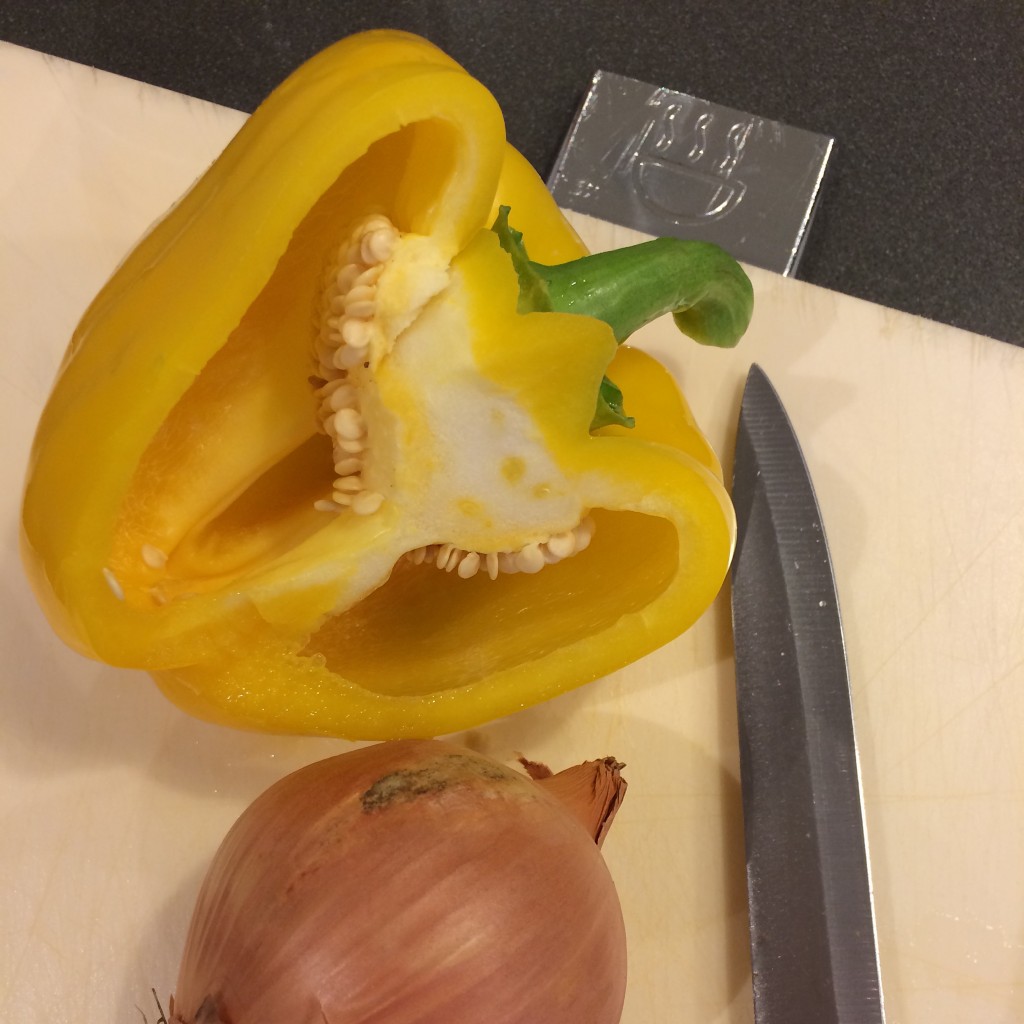