What she wore: Not growing

Home » Family » What she wore: Not growing

It’s been a long time since I posted one of my daughter’s fashion posts. Simply because she seizes on an outfit or two and wears them week in-week out. With no variation, there’s nothing to write about.

For that reason, I didn’t buy her any new clothes for autumn and winter. I wanted to wait and see what she actually needed. Even though I normally only buy her a small capsule wardrobe, I still find there are things that she hardly ever wears, which seems like a waste of money.

So, on the first slightly colder day of the year, she pieced together her own autumn outfit from ‘existing stock’. And I was a bit shocked because I realised it was all two years old.

My daughter has always been slim, but she’s normal, not skinny. She’s not a teeny-tiny build. She’s above average height and seems to grow at a normal rate for a girl of her age, which means she can rarely wear clothes two consecutive years – yet here she was wearing clothes for a third year! It seems that all the dancing and running has changed her body a bit and while other girls her age are starting to fill out, she is, if anything, getting slimmer.

The Tu at Sainsburys robin jumper was a Christmas present from my sister two years ago. She can even still do it up at the back!

Underneath that she wore a long-sleeve Tshirt from Next, which she’s hardly worn before, but which I bought to keep her warm on her year 4 residential last year.

The skirt I bought in the Next sale countless years ago. I always buy at least a size bigger, so she has clothes to grow into and this is an age 8, so goodness knows when I bought it! It was on the short side, but did up easily.

The tights were part of her Christmas party outfit from Tesco, you guessed it, two years ago!

The outfit was finished off with her Next fluffy boots from last year. My daughter loves getting new shoes and it annoys her that her feet haven’t grown much over the last year. Coming from a family of people with big feet, I say don’t ever wish for your feet to grow! I was a size 4 or 5 at her age. She’s a 2.5 – a normal size for a girl of her age and that’s absolutely fine.

I drafted this post in October and hung onto it until I managed to get a photo of the outfit in question. She never wore it again. She has pretty much worn nothing but leotards and tracksuit bottoms for the last eight weeks, due to the panto. She got a few nice jumpers for Christmas and decided she needed a denim skirt to wear them with. She found an age 7 skirt in her wardrobe, which fit fine, even if it was a little bit short.

Has anyone else found their kids’ growth slowing down around the age of 9? 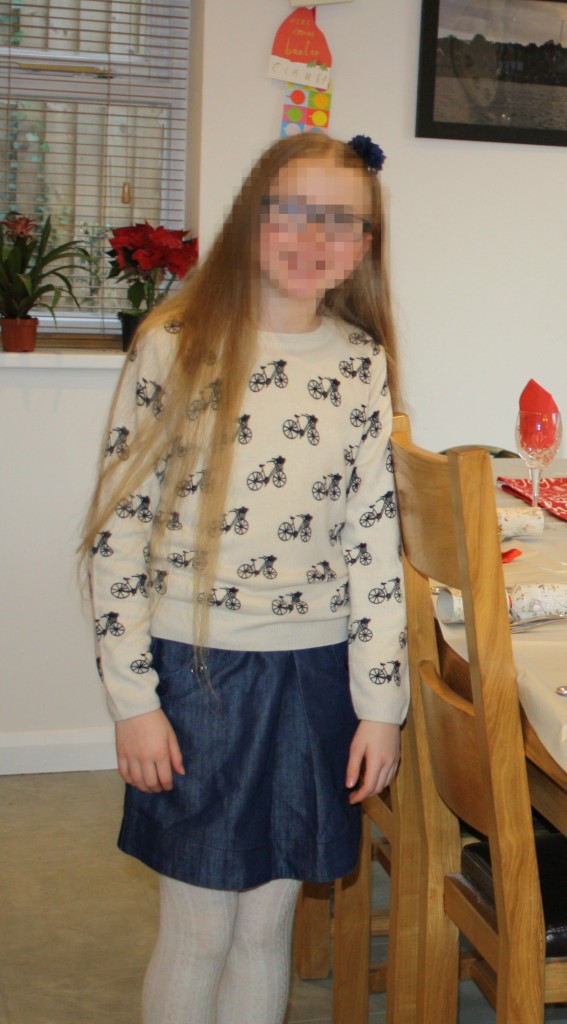