Over recent months, my eldest has become increasingly nocturnal. He’s a teenager. It’s what they do, a normal part of their development. He will often still be banging around his room at 11.30pm. My younger son too has been letting his bedtime slide to around 10.30. It’s something I’ve let go and chosen not to fight with them about, as it’s something I seem to have no control over.

But over the Christmas holidays, it slipped too far. My younger son was still awake at 11.30 and my eldest? He would often see 12.30. New Year’s Eve was a particular low point, when I heard him talking on the phone at 1.45am. Yes, I’d forgotten to confiscate his phone that night.

My daughter has an ongoing battle with sleep and low level anxiety. She goes to bed, she can’t get to sleep, she worries, she can’t get to sleep… Most days it takes her about 45 minutes from getting into bed, but a couple of days a week it takes longer and she starts to get stressed and tearful. I used to sit outside her room, but then my husband banned it. She coped OK for a while, but then I started having to put her in our bed to settle her. Usually she would be asleep before we went to bed, or before my husband went to bed, and we could move her back to her own bed. On New Year’s Eve, that was never going to happen, so she slept in our bed all night.

The kids coped fine with these late nights over Christmas. Because the boys were getting up at 11. I got my daughter up at 8 or 8.30 most days, to try to break her cycle of bad sleeping, but on New Year’s Day she got up at 10.30.

But one person didn’t cope well with it. One person can’t change their body clock to going to bed late and getting up late. One person wakes up at 5 regardless of how many times she’s been disturbed by a tearful daughter or a teenage son on the phone.

Over the course of the holidays I found the difference in our body clocks increasingly frustrating. I go stir crazy if I’ve not been out in the fresh air by 11am, but my kids hadn’t even had their breakfasts. They didn’t want me nagging them and telling them to get dressed because it was the holidays, but I needed my lunch! Then at 10.30pm as I was falling asleep in front of the TV I still had to contend with two hyper boys and a stressed out girl.

My disturbed sleep and meal patterns caused by my kids’ changed body clocks left me feeling stressed out and unhappy. But still I couldn’t sleep any longer in the mornings.

And it’s going to get a lot worse as they get older, isn’t it? How do other parents cope? 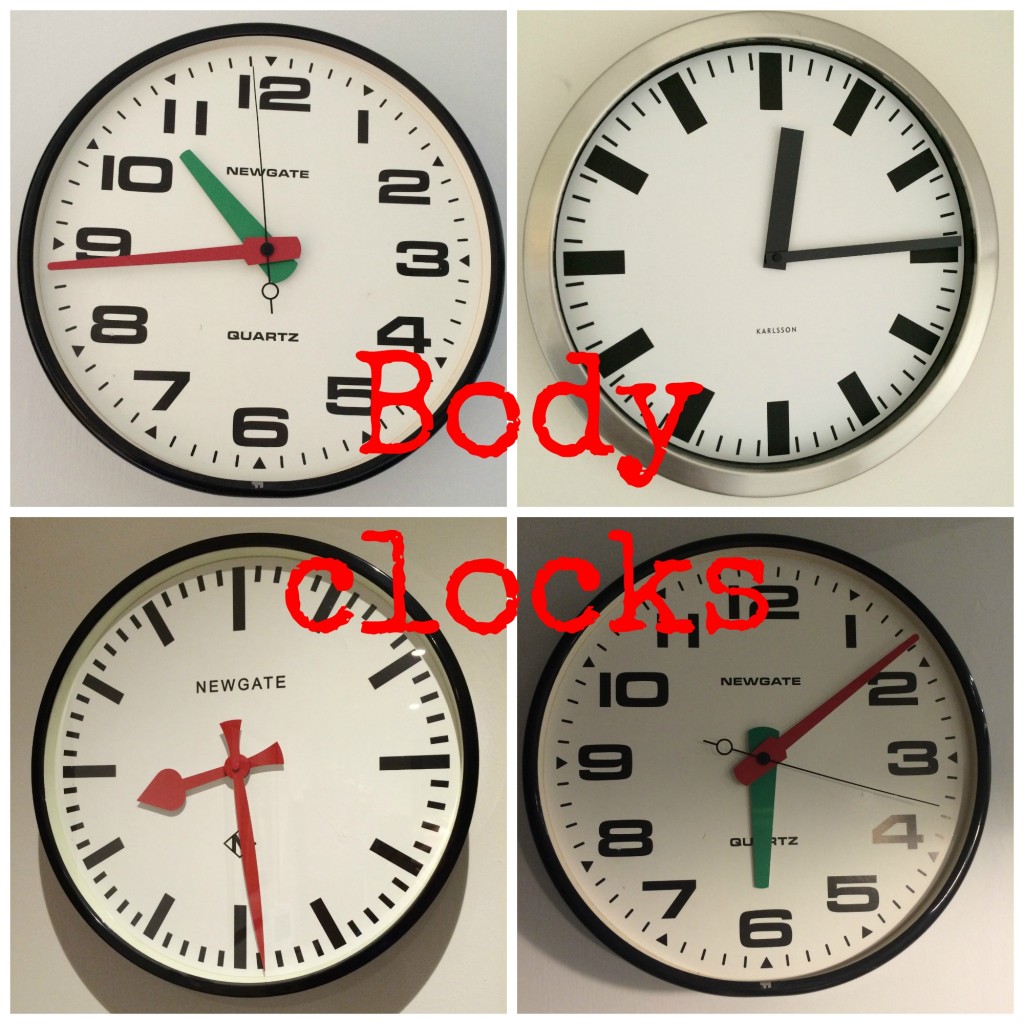