The Son by Jo Nesbo

What’s this? A Jo Nesbo novel which doesn’t feature Harry Hole? With Hole’s long and varied career finally coming to an end with Police, Nesbo has turned his hand to writing stand-alone crime novels. (Although of course there’s no guarantee this doesn’t become the start of a series.)

The Son bears all the hallmarks of a Nesbo novel. Which, as far as I’m concerned, is a good thing. It’s a complex story, revolving around corruption in the police and prison service, with a typically high body count. It’s to Nesbo’s credit that he makes what should be the bad guy – The Son of the title – into a likeable, if highly flawed, character. Is he really as bad as he seems? Did he really commit all the crimes he was accused and convicted of?

So is it as good as a Hole novel? Can a Nesbo thriller survive without Harry Hole?

The main cop characters are equally as complex and intriguing as Harry Hole. And they’re blank canvases, leaving the reader unsure as to their motives and how they will react in certain situations, whereas Harry Hole addicts have a pretty good idea what Hole would do in most situations.

This is another well-written and thoroughly entertaining superior thriller by Nesbo and is well worth a read.

Nesbo is a particularly prolific writer and has already published another non-Hole novel since The Son, Blood on Snow, which is currently only available in hardback. I’m looking forward to reading it already. 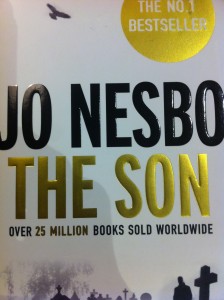