The Levellers: A Curious Life

Regular readers will know I LOVE the Levellers. And I’ve been to see them AGAIN. Yes, I did only see them in November and in May before that, but you can never get enough Levellers in my humble opinion. Well, I can’t. And this time was different. This was a screening of their documentary film A Curious Life, celebrating their 25 years as a band, followed by an acoustic set. I wasn’t sure what to expect, but I do know that it far outweighed my expectations.

The documentary was the story of the Levellers, but told in a bit of a backwards and forwards kind of way, mainly from the point of bass player, Jeremy, who is funny and endearing in front of the camera. He fed the seagulls in his garden and showed us his extensive collection of history books, before introducing us to his art and music, interspersed with ‘that light switch is broken’, ‘we had to kick the door in’ etc etc. The film was made by Dunstan Bruce, formerly of Chambawamba, who toured with the Levellers on a number of occasions, and would totally have got where they were coming from.

The Levellers have a huge fan base, yet they’ve never been ‘popular’ as such. The film shares their tiffs with the music press. Remarkably, I remembered the exact covers and the exact headlines, it’s incredible what you can fill your head with as a young adult with no responsibilities! The film also shared footage of Glastonbury 1992, the first time I saw them. They didn’t have footage themselves and had to literally go crawling round a loft and sifting through boxes to find it. Again, I remember the exact words that were uttered (rather choice language against Michael Eavis), because I’d had a bootleg tape of the concert.

Despite their long career, the Levellers have no intention of splitting or quitting the music business. They say they are going to keep on playing and recording until they’re dead!

After the film, Jeremy and Dunstan took questions from the audience. I would really have liked to ask one, I just wasn’t sure what!

Then it was time for the acoustic set. In many ways, an acoustic set doesn’t differ that much from a regular Levellers set, because that’s the nature of folk music. The main differences were that they were sitting down and the lighting was un-spectacular! Oh, and the audience stayed seated and didn’t punch the air. It was REALLY hard not to punch the air, but I danced in my seat.

They kicked off with The Boatman, which we saw from the film had a particular significance to band member, Simon. Then it was onto The Road.

The next song was the first song they wrote together – Hard Fight. It didn’t appear on a studio album initially, but appeared on See Nothing, Hear Nothing, Do Something, a collection of singles, B-sides and live tracks in 1992. It contains the words ‘you’re by yourself again,’ which struck a chord with me at the time. I was in my first year at university and it turned out that broadcast journalism students (of which I was one), weren’t keen on Levellers fans from Gloucestershire, so I quite often was by myself (again). 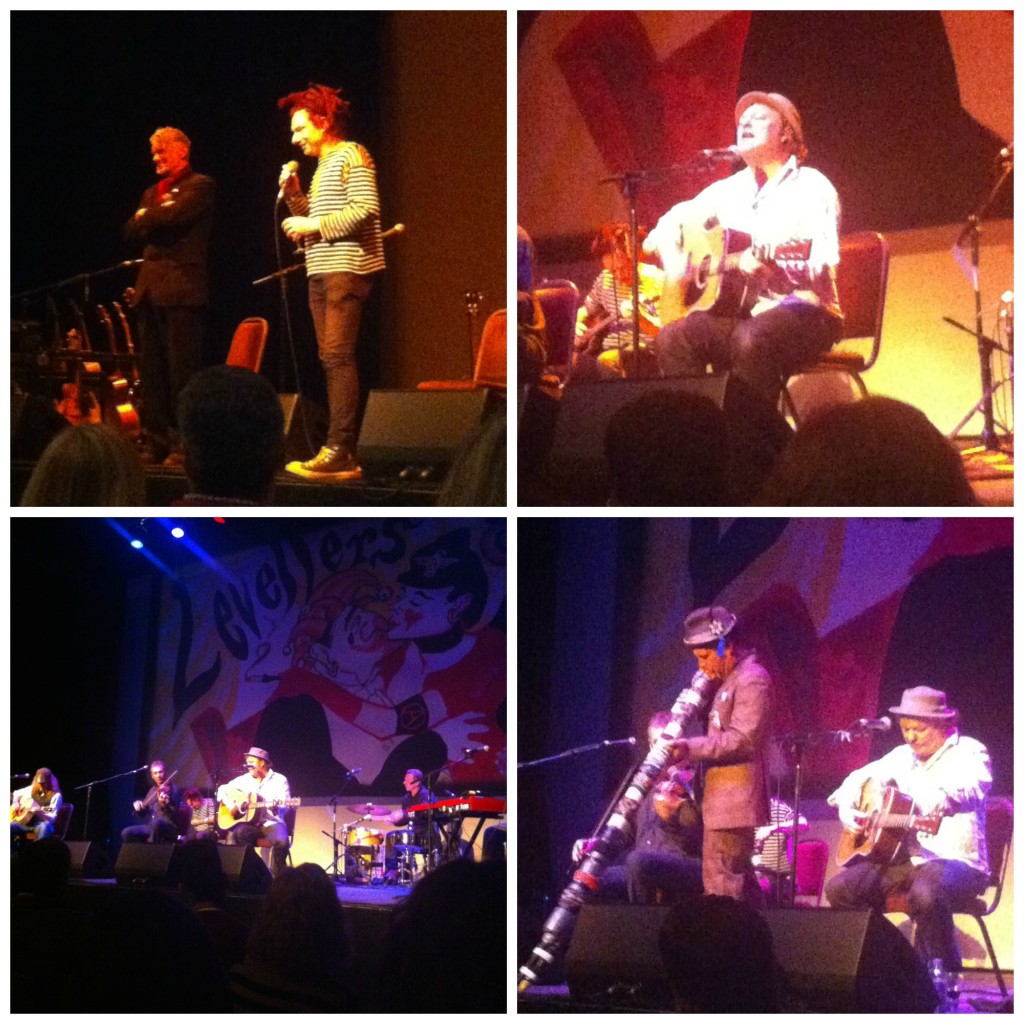 There was a handful of songs I didn’t recognise. After Mouth to Mouth, the fifth studio album, I got wrapped up in kids and didn’t have as much time to listen to music. I bought the albums, but hardly listened to them, then, when I did have time to listen, I went back to my old favourites – the first five albums.

The band chatted to the audience between tracks and it turns out that lead singer, Mark Chadwick, has a Stewart Lee-like sense of humour. The acoustic set suited both his and Simon Friend’s voices perfectly.

It wasn’t until three tracks from the end and Truth Is, from most recent album, Static on the Airwaves (which I love as much as the old albums), that people finally got up and danced. Thank goodness for that!

For the encore they sang Carry Me and What You Know, both from first album A Weapon Called the Word. Earlier in the evening, my husband asked me what it was that got me into the Levellers in the first place. It was Carry Me. They played it at the club I went to on a school night at the age of 17, among New Model Army and Sisters of Mercy tracks. It was simultaneously beautiful and dirty, and I loved it. And I’ve never stopped loving it.

Together, the documentary and the acoustic set make a brilliant evening. It’s a pretty long tour, so if you get the chance to go along, I would highly recommend it!