This book is described on the cover as ‘Arguably the biggest word-of-mouth literary sensation of the decade’. It has also been made into a film (which I haven’t seen). I was unaware of all of this. I just liked the title.

On his 100th birthday, Allan Karlsson decides he doesn’t want to attend his own party, so, still wearing his slippers, he climbs out of the window of the old people’s home and disappears. On a whim, he takes an irritating young man’s suitcase and catches the bus. Before he knows it, he is hanging out with criminals, there are several murders in his wake, an elephant and a whole lot of cash. The police are hot on their tails, but seem completely incapable of tracking down Karlsson, the money or the criminals.

Every other chapter goes back in time to Karlsson’s younger years, in which he drifted Forrest Gump-style through some major historical events around the world, working for Communist dictators and US presidents alike.

This is a book to make you chuckle. It is totally unbelievable, but very entertaining. However, even though I liked it, I didn’t LOVE it. I found some of the flashback chapters a bit boring and didn’t like the way they broke the story up. One friend told me she gave up reading those chapters altogether and enjoyed the book a lot more.

If you like a book that makes you laugh, and you have an interest in 20th century history, this is well worth a read. 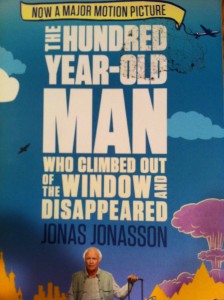