I find it incredible that the time has come for my son to choose his GCSEs. It doesn’t seem long since he was starting secondary school, but we’re halfway through year 9 now and it’s decision time.

I wasn’t sure what options even entailed in this day and age. I knew they would have to take some core subjects, but I didn’t know how much choice there would be beyond that. My husband summed it up with the words: ‘So this is when he can drop RE?’.

In my day, you had to choose from columns and, sometimes, there was just no way you could fit all of the subjects you wanted to do together into the columns. There really wasn’t a lot of choice. I guessed it would be similar for my boy. We went to school to find out more.

I was impressed that he seems to have a lot more choice than I’d had. They have to do English, maths and science, of course. They also do PE and life skills stuff, not as exam subjects. They are advised to do a language. Apparently universities these days like to see a GCSE in a language. I can’t imagine a GCSE grade C in French would have much bearing on your ability to study maths or medicine, but what do I know?

At my son’s school, in addition to their core subjects, they choose two subjects from one box, which they’re guaranteed to get. This includes the more academic subjects, like languages, geography and history. There is a bigger box, which includes the same subjects again, but also lots more subjects, like the arts and business studies. There are lots of different types of art and design & technology (DT), as well as drama and music. You didn’t have a lot of that sort of stuff in my day (I would have loved to do GCSE drama!). From this box, they have to choose four subjects, of which they will be allocated three. So if they really want to do French or geography, they need to choose them from the other box.

My son really wants to do business studies, but he’s started talking himself out of it. He says everyone wants to do it and he doesn’t think he will get it. Well, why wouldn’t he? It seems he has a 75% of getting it. I also doubt that ‘everyone’ wants to do it. Apparently the reason some kids want to do it is because of a year 10 trip to Cadbury World. Not really the best reason to choose a subject.

We got the chance to walk around, look at displays and talk to teachers about the GCSE courses. My son’s attention span was zero. He walked into a crowded room and couldn’t be bothered to wait. He didn’t seem to realise, or care, about the importance. Eventually we managed to actually talk to some teachers.

A display caught my eye. It was about moral issues, like wars and animal testing and some really big questions. That’s just the sort of thing my son likes. He always watches the news and has a far better understanding of world affairs than me. What subject was this? It was RE. The one subject we’d all said he would drop. Apparently RE is a lot about ethics and issues. It sounds really interesting.

We found out about the history syllabus, which doesn’t cover either of the World Wars as the school takes a view that they study them in year 6, year 9 and at A Level, so they do something different in years 10 and 11. My big concern about history is that the first 25% of the final mark is picked up in the first half-term of year 10! So there’s no time for slacking. I’m not sure how well that will suit my son.

He liked the sound of geography and business studies and we ascertained that music would be a viable option for his ‘arty’ subject. Owing to his general attitude to music, specifically his lack of violin practise, I have my concerns about this and had to remind him he will need to give it equal time and status with his other subjects.

After his initial reluctance to engage, the evening turned out to be a useful one for both of us and we came away confident of what he would choose – French and geography as his guaranteed subjects, then history, business studies, music and RE for his optional subjects. I can safely say I never expected a child of mine to study RE! The temptation was to fill the form in there and then and get it straight back, but I wanted to give him to reflect to make sure he’d made the right choices. I told him to look carefully at the assessment criteria for each subject to make sure he was happy with the balance of coursework and exam. Apparently that wasn’t an issue, as he’s good with both of them. (I hope so, although I’ve yet to see evidence of this!) 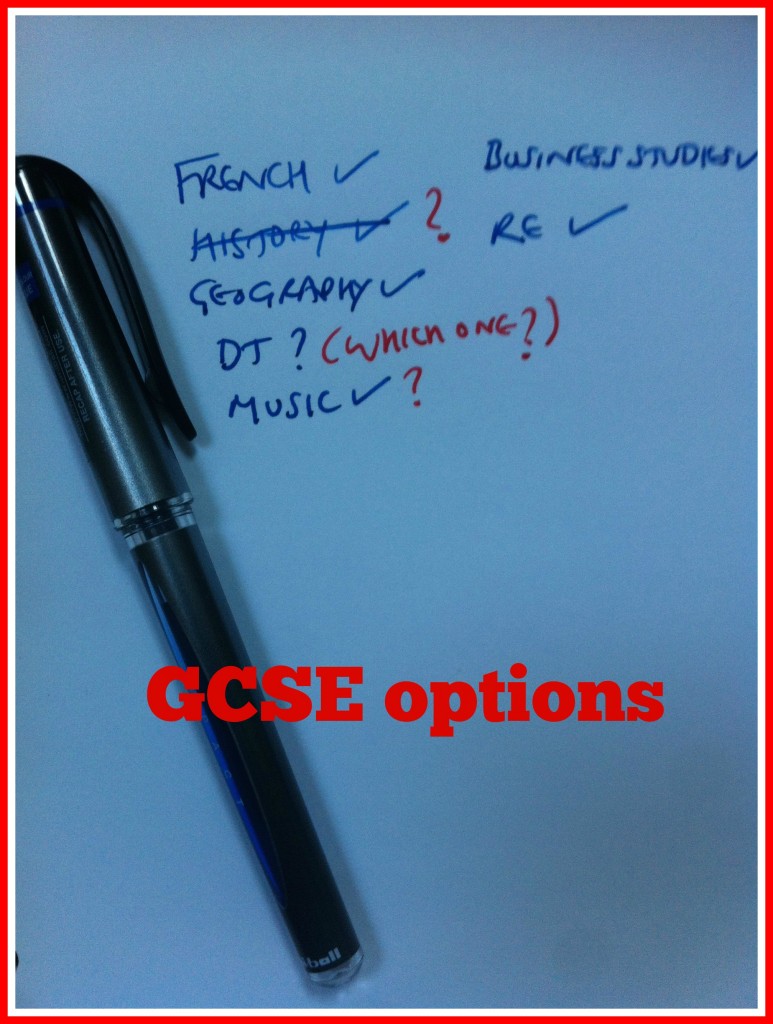 A few days on and the form still hasn’t been handed back in. I suggested he hand it in before half-term (the deadline is the day they go back). But he’s wavering. He’s now not sure about history and is wondering whether he should do one of the DT subjects instead. I know he’s always enjoyed DT, so I don’t have a problem with this, but I would rather he dropped music than history. For someone who isn’t an arty person, it would seem silly to be doing two arty subjects. The reality is, he’s unlikely to get a B in either of them, whereas he should get a B (or hopefully an A) in history.

So the jury is still out. There’s still a bit of decision-making to do. But I’m glad he’s taking it seriously now and really thinking about what is right for him. I’m confident he will make the right choices in the end.