My eldest plays the violin. He’s been playing it since year 3 and he’s not as brilliant as you’d expect for someone who’s been playing for nearly six years. He got pretty good in year 6. He was enthusiastic and played every day. He passed his Grade 1 with Merit. He did his Grade 2 last year (in year 8), but it was more of a struggle for him – a struggle to find the motivation to practise, that is. He’s now plodding very slowly towards Grade 3, which I’m guessing he won’t do until year 10.
He cannot find the energy, enthusiasm or motivation to practise, preferring to sit watching DVDs, playing on the Xbox, reading or anything other than playing violin. I think he only needs to do five minutes a day, just to keep on top of it, or two or three longer practises a week. But he won’t do it. I couldn’t even interest him in a YouTube tutorial by Jon from the Levellers (he loves the Levellers almost as much as me) to learn to play Beautiful Day. Yet he says he doesn’t want to give up.
Recently his violin teacher and I have become almost pen pals – as she emails to tell me he needs to practise more as he’s struggling with a piece, he needs to hand a letter back in or even to politely request payment. And I do my best. I really do. But you can’t make a boy play violin. You also can’t make him give you a letter. He gave me a letter on 28th November to sign, which should have been handed back in by 21st. I signed it immediately, he left it on the table and went off to school without it.
I’ve now taken to emailing the teacher to tell her I’ve given him a cheque or signed a letter, so she should just ask him for it. Because even when he does take the letters and cheques, he forgets to give them to her. 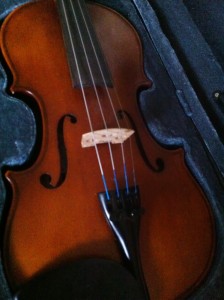 Despite all this, I was looking forward to seeing him play at the Christmas concert. He had fallen behind with his practise, but eventually got his act together and got the piece more or less right. He played in two groups – a group of year 7-9s and a bigger group of all the violin players in the school. He used to play in the junior orchestra, but he’s dropped out this year. When I asked him why, he said it’s because it’s ‘full of boffin girls’.
Over the last year or so my son has developed a negative attitude towards ‘boffins’ and ‘geeks’. It’s not an attitude I like and it’s not one that I think is the real him. He is amused by kids who mess around and disrupt the class (although it’s not something he would ever do himself, his worst failing is disorganisation and a slightly lazy attitude). He doesn’t want to associate with ‘boffins’ and ‘geeks’ because it’s not cool. I’ve told him that when they’re all grown up, it’ll be the boffins and geeks who are the cool ones. They’ll be the ones with the good jobs and the nice houses while the ‘cool kids’ who mess around will have crap jobs or no jobs. And that’s not so cool.
The violin group walked onto the stage at the Christmas concert.
‘Where are the boys?’ whispered my husband (although not whispered quite as quietly as I would have liked). ‘There are no boys!’
There was one boy other than my son in the smaller group, a year 8. In the full group there was also a couple of big boys – year 11s or sixth formers, but there was A LOT of girls.
‘I get it now!’ says my husband.
He can see where my son gets this attitude about the violin, practise and the orchestra from. Because there are no boys. He feels outnumbered and left out. We admire him for sticking with it in the face of that, but don’t want him to use being one of very few boys as an excuse to not join in. Being able to play music is a great skill to have (one which neither my husband nor I has), and one which shouldn’t be thrown away just because it’s not cool or you don’t fit in.
The school seems to be one that really values and embraces music and there seems to be a lot of kids who play, and play very well, but where are the boys? Boys play music at primary school, so why aren’t they still doing it at secondary school? Does the school do enough to support them not to to give up?
In my opinion, and I’m a past-it 41 year old woman, not a ‘cool’ teenager, the really cool ones are the ones who stand up and say: ‘Who cares that people don’t think it’s cool, who cares that it’s a bit geeky, I’m going to play music, I’m going to enjoy it and I’m going to be proud of it.’
This is one of the many reasons why we’re glad our younger son is going to grammar school and we hope our daughter will too. We don’t want our talented kids to be held back by other’s perceptions or a need to fit in. At grammar school, the aspirations will be so much higher and the ‘fitting in’ will be with other talented kids, not with kids who want to muck around and frown on hard work.