‘It’s the thought that counts’

But when is it actually said?

When a present is a bit crap.

Because the thought of buying a present counts, but so often the thought that’s gone into it is completely lacking.

And if you can’t put thought into a present and buy something someone would appreciate, is there really much point? Too many of us feel forced into buying presents for people we don’t really know – the sister-in-law or the teenage niece or nephew. So we buy them something we would like ourselves, or our own children or grandchildren would like. We don’t consider whether they would actually like them, because we don’t take the time to find out.

And more often than not, we get drawn into buying crap by clever marketing and packaging. How many presents have you or your kids unwrapped this year that smack of 3 for 2 desperation? I don’t much like ‘toiletry sets’ myself. Scrap that, I don’t like them at all. I don’t really know anyone who does. You might like toiletries, but most people like the toiletries they use regularly, not some random set beautifully packaged to con unsuspecting Christmas shoppers.

But then your sister-in-law is stood in Boots, panicking about what to buy you – and she grabs a toiletry gift set. And she realises it’s 3 for 2. It seems pointless only buying one item. So she gets drawn into buying a pair of socks in a mug for a brother-in-law and a deodorant gift set for a teenage nephew. This stuff is all crap. Total and utter crap. Who needs socks in a mug? Buy some socks from M&S. Don’t buy them in a mug from Boots.

Where does this stuff go? At best, it goes to charity shops or the Scouts jumble sale where it can at least do a small bit of good in the world, but nowhere near as much good as it would if the money that had been spent on that deodorant set had just gone straight to charity. At worst, it goes straight in the bin. Straight into landfill where it continues to harm the environment and doesn’t do anything positive for charity or anyone.

So, before you buy a gift, take a few seconds and do a reality check. In all honesty, is it something you would be pleased to receive yourself and, most importantly, would the person you are giving it to be pleased?

Why not ask them, or someone that knows them better, what they like? There’s no harm in giving vouchers, you could even check which shops they like. If you give chocolates, find out which brand they like (I’m so grateful to my in-laws for giving me Green & Blacks Maya Gold, it’s not a traditional chocolate gift, but for me it’s the best chocolate gift you could give me and will always be appreciated). It might take away some of the surprise, but it shows more thought in the long run.

Oh, and never, ever give a gift receipt. They’re not worth the paper they’re printed on. Because those items you’ve chosen because your own daughter likes them, but it turns out your niece or god-daughter can’t stand, will go in the sale immediately after Boxing Day. And your niece will only get back the sale price ie half the price you originally paid for it. So where’s the thought in that?

It’s too late for this Christmas, but as you queue up at M&S with your returns or take the unwanted toiletry gift sets to the charity shop, make a mental note for next year. Don’t be drawn into the crap, the gift sets, the special offers and the gift receipts. Because it really is the thought that counts. 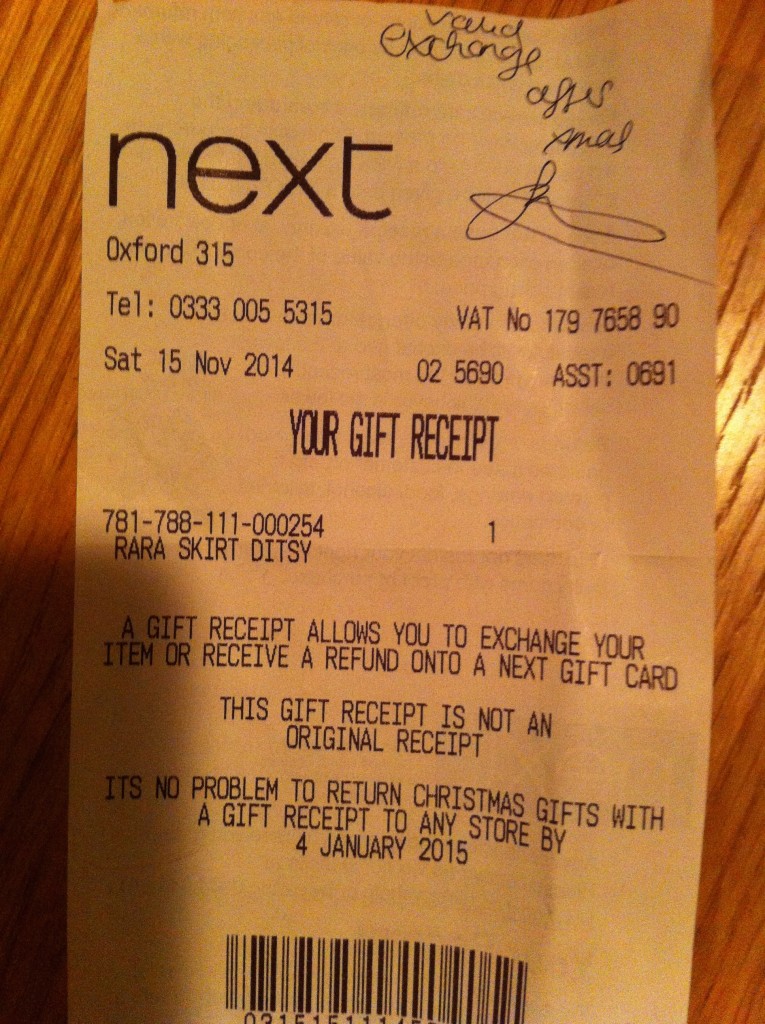 A small number of people have picked me up on sounding ungrateful in this post. That is never how it was intended. I don’t even have any unwanted gifts. It is simply an attack on the clever marketing of retailers which make us think that deodorants in a special box is suddenly not just deodorant, it’s a suitable present. These are usually the same retailers who con us into accepting gift receipts to keep the mystery of how much we have spent on people, while making it very difficult for them to get a decent exchange for an item which is the wrong size or simply not to their tastes.

My daughter has one skirt she wants to exchange – I have taught her that it is far better for everyone to exchange something she isn’t sure about than to leave it hanging in the wardrobe with the label still on it until she has grown out of.