Sponsored silence for Children in Need

After their success last year, my younger two kids decided they would like to do a sponsored silence again for Children in Need. For a whole 24 hours! That’s not easy.

Armed with notebooks and pens, they were silent from the moment they got up in the morning.

My daughter’s first note of the day: I came down early because I needed the toilet.

She then went on to inform me that she did her times tables yesterday because she wasn’t speaking today.

My daughter is a chatterbox who needs to keep me informed of every little detail of her life, so not talking is really difficult for her. My son is much quieter, so it wasn’t so hard for him – he shared hardly any notes with me before school.

The kids were wearing onesies for school to raise money for Children in Need. As she was doing a sponsored silence, my daughter was going full-on Pudsey – she’d got a Pudsey onesie and Tshirt.  She informed me via note ‘I don’t think any more that the Tshirt goes well with the onesie but I will wear the Tshirt on Tuesday and other times’. I stuck to my guns though and she reluctantly went to school in the onesie and Tshirt (but came home not wearing the Tshirt).

The walk to school was a strange one without the chatter.

My daughter looked miserable when she came out of school. She wrote me a note to say ‘I’m tired of writing’. But she was still going!

My poor son came out with a note to say that kids had been trying to catch him and his friend out. He hadn’t been caught, but his friends had. That’s year 6s for you! 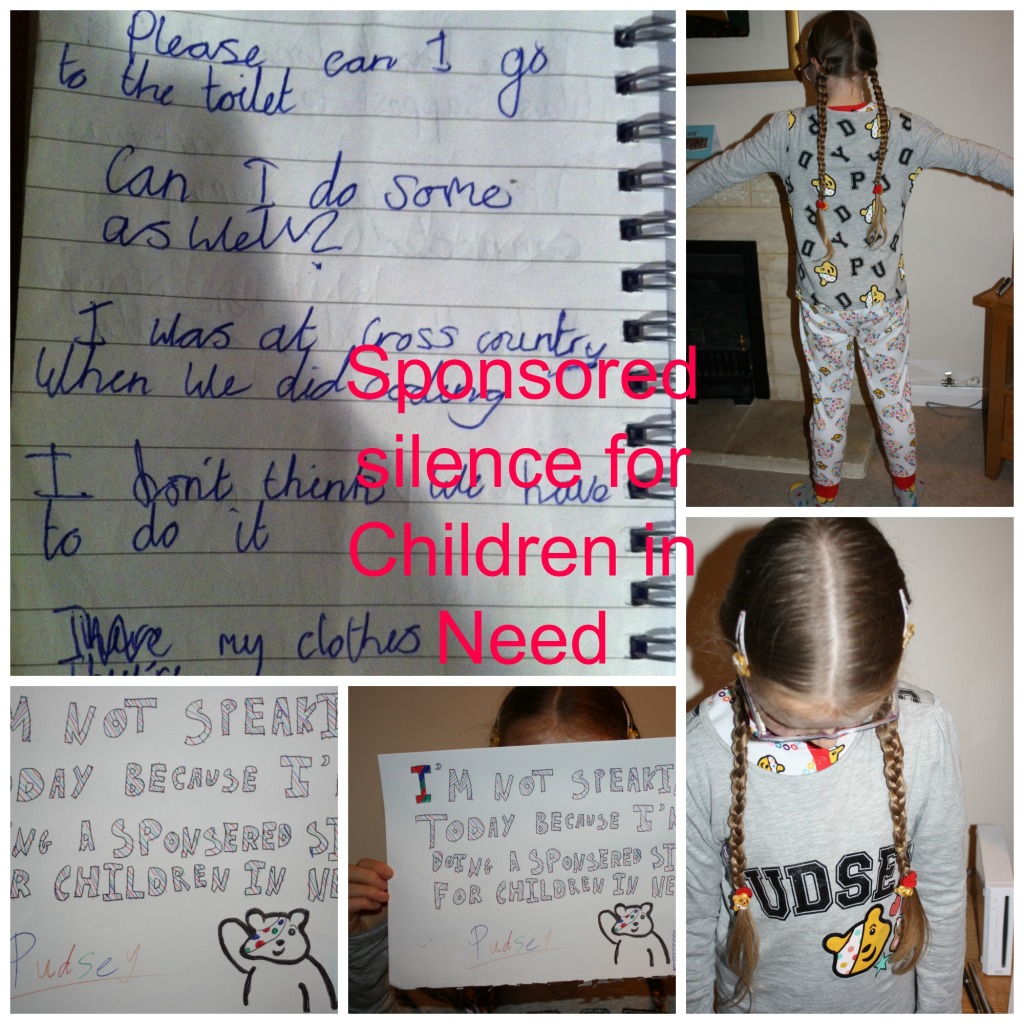 Last year, they’d had loads of adulation and support from other kids and teachers who were in awe of what they were doing. This year, people seemed less bothered. They both had a friend doing the silence with them and there were other kids in the school too. Somehow it didn’t feel so special. Last year’s silence also came at the end of a really tough week for us last November, so it was something to brighten the week up. But this year’s sponsored silence was no less of an achievement.

After school we went to a Children in Need coffee and cake thing at my eldest’s friend’s house. My daughter was sat with me writing notes as I chatted to people, most of whom I didn’t know. It was ages until they realised she was actually doing a sponsored silence – they thought she was just shy. They were very impressed.

I was starting to miss their voices. The house just didn’t seem the same without them. They made it through the evening and right up to bedtime. And in the morning, it was lovely to hear them speak again.

I couldn’t have been prouder. In all honesty, how many adults could stay silent for a whole 24 hours?

They didn’t raise as much money as they would have liked for Children in Need. Unfortunately there isn’t an online facility, but please get in touch if you would like to sponsor them.

Linking up with Loud ‘n’ Proud with Not My Year Off.