Thanks to the lovely Cathie from Wicked World of Lucas (a very funny blog – go and have a read if you never have, I can highly recommend it!) for tagging me to answer some questions.

If you could travel back in time, which person from history would you most like to meet and why?

This was a tough one, but somehow I just kept coming back to Henry VIII. I would just make sure I didn’t marry him! From what we’ve all heard, it sounds like he was a pretty horrible person, but he’s undoubtedly one of the most iconic characters in history. I’d like to know if everything we think we know about him really is true.

If you could be an animal, what would you be?

My favourite animals are pandas, I find them fascinating. But to actually be a panda? That would probably be a really silly move as I would be highly endangered. I think it would be cool to be an elephant though – all big and peaceful. Nobody would mess with you – and you could spray anyone with water from your trunk. Win!

What is the most unusual thing we could find in your handbag?

I don’t think there’s anything TOO bad in there. I do have my daughter’s prescription sunglasses in there all year round, plus a tiny bottle of suncream that I really ought to remove now. I was quite surprised when I found a half-eaten bar of Green & Blacks at the bottom. It had gone kind of white and was actually out of date, which means it must have been in there for a year! How on earth did that happen?! 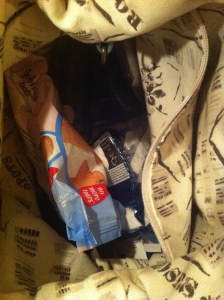 What’s in the dark depths?!

What’s the worst food anyone could serve you at a dinner party?

As a vegetarian, it would be any sort of meat. But the absolute worst meat? That would have to be rabbit. I love rabbits. As pets. The idea of eating them is just disgusting. I remember when I was 15 and on a French exchange, the family I was staying with had rabbit for dinner. I wasn’t even a vegetarian at that time, but I couldn’t bear them eating that rabbit. I could see its little leg bones. I tried so hard not to, but I cried at the table. They probably thought I was bonkers.

What is your earliest childhood memory?

I think it’s hard to know if memories are actually memories or if they’re memories of photos – or even memories of memories. When I was about 11, I thought I could remember walking into the kitchen in a navy dress aged about 18 months. Now I can remember having that memory, but not actually walking into the kitchen! I do have a memory of my baby brother pooing all down the back of the settee when we were about to go out for a walk to the shop. I would only have been 2 or 3.

If you were an athlete, what sport would you excel at?

It would have to be long-distance running. I do run anyway and I really love it, I would just need to run about twice as fast to actually ‘excel’ at it.

If you were any superhero, who would you be?

I would be Mrs Incredible from The Incredibles. Not that I have, or want, super stretchy arms, it’s just that’s she a normal mum who happens to have superpowers. Wonder Woman doesn’t have to look after the kids, does she?

Now I need to think up seven questions myself to ask other bloggers. I’m never going to think up questions as good as Cathie, but I’ve come up with a suitably random bunch.

What is the soundtrack to your life?

What has been your favourite holiday so far?

Where do you see yourself in 20 years?

What do you best remember about your grandparents?

If you could go to space, would you do it?

What food couldn’t you live without?