The Levellers doing a greatest hits tour? I’m there! But where, exactly? In recent years they’ve played Cheltenham Town Hall quite a bit, which is nice and local to us, but this time we had to go further afield. They were playing in places that mean something to me – Nottingham Rock City and Shepherd’s Bush, but Bristol seemed like the most sensible option. The traffic was awful and we couldn’t find a parking space. My husband told me that I ever thought of going to watch the Levellers on a school night in anywhere other than Cheltenham ever again, I could think again.

We arrived at the venue and it was TINY. It reminded me a lot of Rock City in Nottingham where, as it happens, they had played the night before. I get very nostalgic for Rock City as I spent so much time there as a student clubbing and going to gigs. But I never saw the Levellers there. They had played there a few months before I started uni, but they were probably a bit too big for it by the time I was there.

The venue was packed and full of people holding pints up in the air so they could squeeze past others. I’ll be honest, it was freaking me out a bit. Crowds have never bothered me too much, despite my claustrophobia, but this really was VERY crowded and it felt like a long way to the exit and fresh air. I thought ‘I’m too old for this’. But most of the people in the crowd were older than me. Eventually we found a spot where I could both see and felt safe and waited for the Levellers to come on stage.

The lights came on, ticker tape flew down from the ceiling and it was straight into Beautiful Day. There was going to be no messing around and building up to the hits. Then it was Fifteen Years and Belaruse (a song they don’t play often) and World Freak Show, my eldest’s favourite song.

It was nice to hear everyone singing along. When they play Cheltenham, I think there is an element of ‘wow, an actual band playing in Cheltenham – I must go!’ and not everyone is a proper fan. But everyone here was a PROPER fan.

The Levellers always vary their sets quite a bit as they have such a huge back catalogue. They are also unusual in that they play a lot of songs off their first two albums, which remain favourites for most fans. But this time they varied it even more, because they were playing songs off the Greatest Hits album – all of the songs they’ve released as singles. The songs which charted were mainly off their fourth and fifth albums – Zeitgeist and Mouth to Mouth – albums which they don’t usually play much of live. So we heard tracks we don’t often hear, like Dog Train (I had that on a cassette single!), Just the One, Hope Street  and my husband’s absolute favourite, Julie. 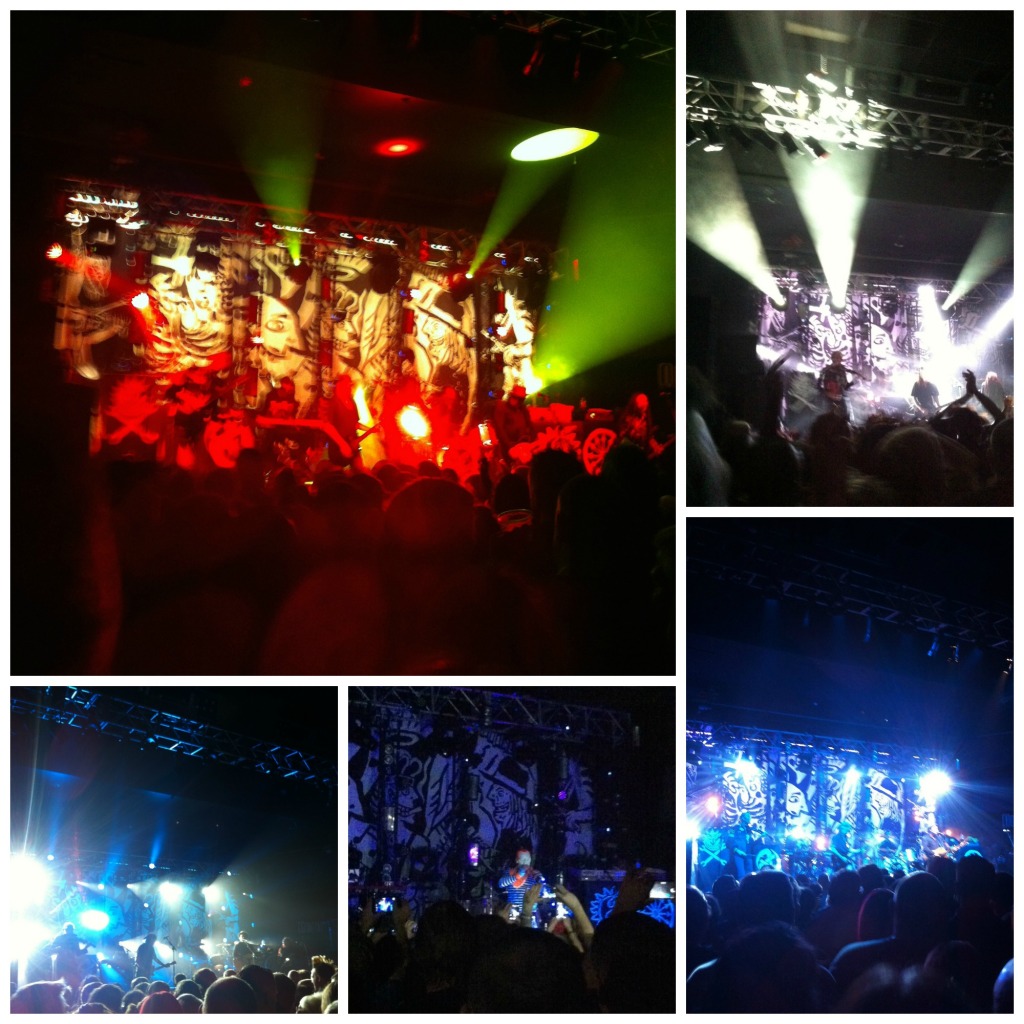 I think of Zeitgeist and Mouth to Mouth as being ‘new’ albums, but then I realise – they were actually released in the 90s. Not even the late 90s. For me, the Levellers’ first five albums are the soundtrack to my early adulthood and sometimes it’s scary to think how much older I’ve got since then.

A Weapon Called the Word and Levelling the Land were the soundtrack to 6th form. The eponymous third album was the soundtrack to university. Zeitgeist was the years stuck in Nottingham unable to find a job and working in McDonalds to make ends meet. Mouth to Mouth was the London years – living in Shepherd’s Bush and working in Hammersmith. All of the tracks bring back vivid memories of those times.

I don’t know if it was the small, old-school venue, or if they were just on especially good form, but the Levellers were chatting to the crowd a lot more than usual.

There were more hits, more ticker tape and the digeridoo bloke. The Levellers might be getting on a bit and so might their fans, but they are still a brilliant live act. So would I go and see them on a school night in a tiny, old-school venue again? Of course I would!