The Devil’s Star by Jo Nesbo

I make no apologies for the fact that I’m obsessed with Jo Nesbo – his books are just so flipping good! And I’ve finally read nearly all of them – just the very latest to go, then I’m waiting for new ones to be published (I really hope there are some new ones!).

The Devil’s Star is just as brilliant as Nesbo’s other books – in fact I’d put it in my top three with The Leopard and The Snowman. It falls somewhere in the middle of the series, so people who have read them all in the wrong order like me, know things about some of the characters which are not yet known in the book. If that makes sense.

Anyway, Harry Hole is once again fighting a losing battle with alcohol. He is missing his ex, Rakel, and her son, Oleg. He isn’t sleeping and his nights are dominated by vivid nightmares. His bosses have had enough of Hole’s erratic behaviour and he’s working out his final few weeks in the police when the words ‘serial killer’ are mentioned.

A young woman is found dead with a strange star-shaped diamond behind her eyelid, then another woman disappears just days later. Has she also been killed? Is it the same man?

Hole is forced to work on the investigation with a colleague he has long suspected of being a criminal himself. While Hole’s career is going down the toilet, his colleague’s is on the up. Can Hole prove he was right all along about his colleague, or will he do further damage to his own career?

There are a few recurring themes running through this book – water, lifts and, strangely, dog shit, which seems to appear in a lot of pivotal moments.

After reading so many Jo Nesbos, I was feeling really chuffed with myself when I thought I’d worked out the killer quite early on. But I was wrong as ever. The books are just too damn complex for the likes of me to be able to solve them.

Once again, another fantastic novel from Nesbo, which comes highly recommended by me – whether you’re into crime novels and thrillers or not (because I’m not particularly!). 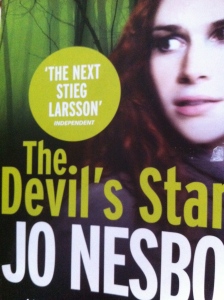