This year our Scout group celebrates its 50th anniversary. To commemorate this occasion, the leaders wanted to give all of the Beavers, Cubs and Scouts a special badge. A badge designed by one of the group.

My boys are not artists, and my eldest struggle to focus on anything or do anything tidily, but they both set to work designing badges. Scouts means a lot to my eldest in particular and he tried much harder than he would on anything for school. My younger son is just competitive and hard working and likes to do his very best in everything. So both of their badges were very good! They were neat and carefully drawn and well-thought out. I was very impressed. Months passed and I heard nothing more of the commemorative badge.

‘What happened about that Scout badge? Who won?’ I asked my eldest recently.

‘Me and younger brother did,’ he said nonchalantly, like it didn’t matter at all. Sometimes that boy is so laid-back he is almost horizontal. It was a really big deal to have won the badge competition. But it was almost like water off a duck’s back to him.

Their recent camp was a special camp to celebrate the 50th anniversary, and all of the Cubs and Scouts were presented with one of the special badges. Designed by MY boys. Well done, boys! 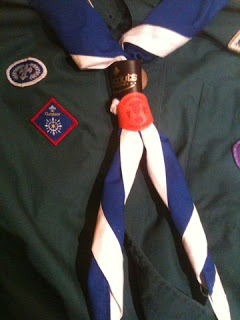 If you or your children have achieved anything recently that makes you really proud, please join in and add it to the linky below.