Every year my younger kids’ school takes a week off timetable to do something amazing. Last year they decorated the walls of the schools with some incredible artwork. This year they performed The Lion King.

They had just a week to pull it all together – working with children from reception to year 6 learning songs and dance moves, as well as painting animals to decorate the stage. There was a small number of speaking parts for year 5 and 6 children.

Now I really, really wanted my son to have one of those speaking parts. But I didn’t want to pressure him. He was nervous of going for something and not getting it. Nervous of being disappointed. But if he didn’t go for it and he saw someone else doing a rubbish job? He’d regret it.

He fancied Scar or Zazu. Of course I wanted him to do Pumba (regular readers will know I’ve had a toy Pumba for half of my life which comes out every birthday to hold the birthday cards).

When he came out of school on the first day I didn’t even know if he’d auditioned. But he was smiling. It was a smile that said he’d auditioned AND he’d a got a part. He’d decided Zazu had too many lines, so he went for Rafiki (the crazy, wise monkey) – and he GOT IT! A key part in the story and my boy got it. Out of approximately 120 children eligible to audition, NINETY of them had gone for a part – and there were only 14 parts. I was so proud of him.

So now I just needed to get the best view. I have a problem with school plays/ concerts/ assemblies. I am ALWAYS at the back. Usually half obscured behind a pillar. It’s always the same people at the front and always me awkwardly looking round for the spare seat. But this time I was going to get there early. I decided an hour early was the only way.

You can’t imagine my elation when I arrived an hour early and I was THE ONLY ONE THERE. I had secured my seat at the front! I wasn’t the only one for long – and was pleased it was friends of mine that turned up next.

The kids filed in – all 400+ of them wearing brightly coloured Tshirts designed by my son’s friend. They were on the stage, the floor, the balcony… There were kids everywhere. Just the sight of them made me well up. But where was my son? He wasn’t there. But as luck would have it, my daughter was right in front of me – beaming her way through the Circle of Life.

My son’s lovely, cute, smiley best friend kicked off the show as Scar. How could such a lovely boy play Scar? But he did. And he made a blimmin’ good job of it. He was properly scary. The scene where he killed Mufasa (my friend’s son) was so beautiful and moving.

The scripted bits were interspersed with singing and dancing – songs like I Just Can’t Wait to be King and my favourite (of course) Hakuna Matata. The kids in years 1-6 were divided into houses (I like to think of my kids’ house as being Gryffindor) and each house had its turn taking the lead and dancing on the stage. The reception kids had their own dances which were about as cute as it’s possible to be. The range of expressions and movements was just adorable. Needless to say, my daughter gave it her all on their dance.

Simba met up with Timon and Pumba. I cried a bit over Timon’s singing (a girl in my son’s class, who I hardly even know) – it was absolutely beautiful.

Then a vision in red, yellow and blue face paint streaked onto the stage. His footsteps were so light as he darted around furtively. Then he spoke in a voice which wasn’t his own. It was the voice of a wise, old African monkey.

It was also the voice of a blimmin’ good actor. He was captivating. He acted with every inch of his body. I welled up, grinned like a loon and took photos until my husband told me to stop.

The teacher who had done his make-up had pulled out all the stops. He looked fabulous and his head dress was exactly the same as the one in the West End show. 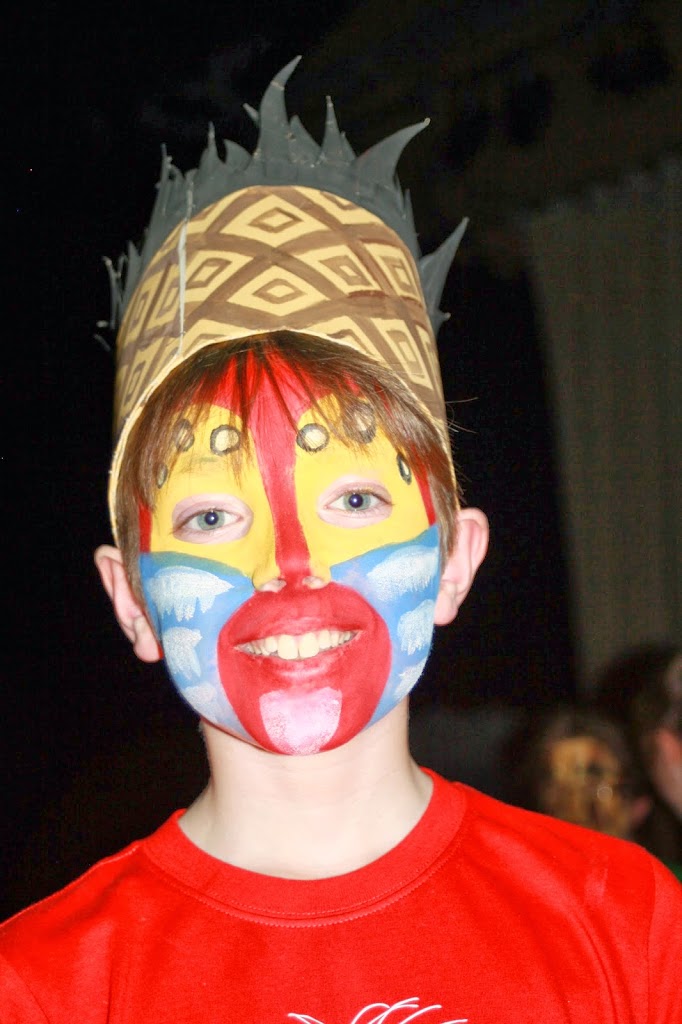 Rafiki showed Simba his reflection in the water and convinced him Mufasa lived on in him. They sat there quietly on stage in character as the kids all sang their song. Then it was back to claim the Pride Lands and get rid of Scar.

The show was absolutely fantastic. I was so proud of both my kids, and in awe of everyone at the school for all they had achieved in just a week.

This is my entry for Loud ‘n’ Proud. If you’ve got something you want to shout about this week, please link up below and have a read of some of the others too. Next week Loud ‘n’ Proud will be hosted by Judith at Secrets of the Sandpit 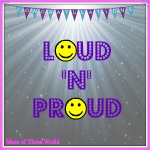