Today’s the day. I finally say goodbye to the workplace and the colleagues I’ve always loved.

How do I feel?

Excited, unhappy, depressed, anxious, elated, happy, sad, stressed, worried… All of these and more. I change from minute to minute. It’s been there with me for weeks now. I don’t feel right. It’s nagging away at me in the background. I’m not myself. I’m not firing on all cylinders.

I guess more than anything I feel overwhelmed. All of this stuff coming together at the same time is too much.

I’ve been there 15 years. It was only my second proper job. I started when I was 25 – young, pretty, naive and willing to learn, willing to take on the world and show them what I was made of. I’d moved back from London for the job – I’d been desperate to get back to my home town. I’d just bought a one-bedroom flat with my boyfriend (now my husband).

From there a lot changed – in my personal life and at work. A year later I got married, another year later I had a baby. I was pregnant again just over a year after getting back from maternity leave. And then again a final pregnancy another year and a bit later.

I worked full time for social services from 1999 to 2003 (yes, I went back full-time after my eldest was born). I started working for the council as a whole in 2003 and dropped to four days a week for a few months. When I came back from maternity leave I worked three days a week, which I’ve done ever since. I’ve had a couple of job shares, but mainly it’s just been me. A few years back I decided to work a shorter day on Monday because all of the money I earned was being spent on after school club and having me at work made it hard for the boys to get to Beavers and Cubs.

I’ve always loved my work. I loved what I do and I loved the people. I have never laughed so much as I laugh in that office. There is no subject which is taboo, nothing people won’t talk about.

Over the last couple of years I’ve fallen out of love with it a bit. Some of my favourite people have left, we’ve moved into a bigger office and the fun has been diluted. As new people have come into the team, I’ve become a bit invisible I’m ‘only’ part-time, ‘only’ in a junior role, I don’t go out drinking on a Friday night – I’m not really worth knowing either professionally or personally. Sod the huge knowledge that I have that I’d be willing to share with anyone who asked. They’re too good for me. They’re young and going places. I’m old and stuck in a rut. (Do I sound a bit bitter? Sorry. I am a bit.)

I’m going to miss it.

I’m going to miss the laughter.

I’m going to miss the swearing (nobody swears like I do, but I only do it at work). To anyone who says swearing shows a limited vocabulary, I say ‘bollocks’.

I’m going to miss the endless supply of biscuits cakes and chocolates – from holidays and birthdays and just because people feel like bringing them in.

I’m going to miss the journalists who phone up.

I’m going to miss the people that are stupid on the phone or on twitter and shouting at them in the office so they can’t hear.

But most of all I’m going to miss the people. The special ones. The mad, crazy, loud ones. The ones who have been with me for a long time. They know who they are. 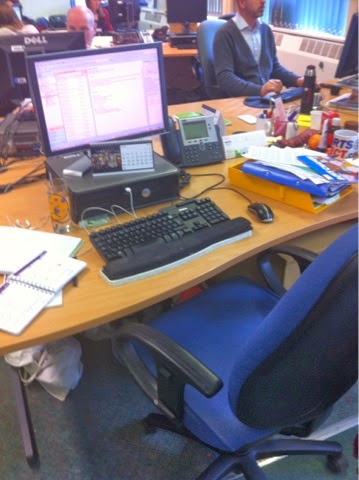