What she wore: A walk in the forest

Home » What She Wore » What she wore: A walk in the forest

This year I must admit I did something I’d never done before – I compared how much I’d spent on the kids’ respective Christmas presents and then I bought some more to make up for the shortfall. The boys got televisions this year – that was my idea (they weren’t even keen!) because I was fed up with them dominating the telly at 9pm and later. I want the option to send them away to watch their programmes in the evening. I looked at the boys’ TVs and I looked at my daughter’s modest pile of presents – basically some bed covers and a onesie – and I felt compelled to buy her more.

One of the things I got for her was this cute rabbit top and leggings set from Sainsburys. I am a complete sucker for anything with a rabbit on (they’re my favourite animals) and anything with glasses is an added bonus. My daughter has been wearing glasses since she was 3, and I think the current trend for animals wearing glasses on clothes is a really positive message for her – glasses are cool! I don’t want her to resent wearing them and think they’re uncool as she gets older. 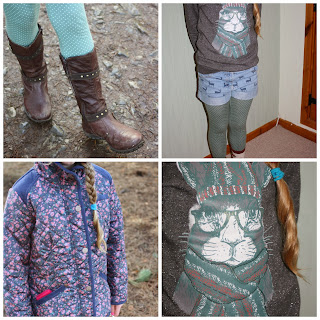 The outfit is green and grey, which she doesn’t usually wear, but between the rabbit and the bargain price, I couldn’t resist! It’s quite wintry, as the rabbit is wearing a scarf and hat, and it also has a little bit of twinkle in it, which makes it seem Christmassy. The leggings have a polka dot and are quite versatile – I’m sure we’ll see them with other outfits in the future.

As far as I’m concerned, it doesn’t matter if you’re 7, 27 or 47 and if you’re a size 6, 16 or 26, leggings should NEVER be worn with just a top. Luckily my daughter has got this message loud and clear and wouldn’t dream of wearing them alone either, so she combined them with her favourite Next denim shorts with the deer design for a walk in the forest. 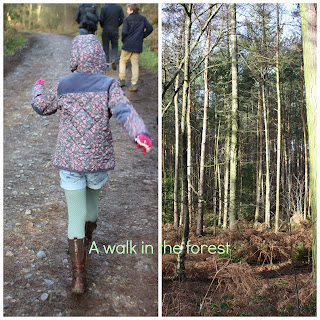 She finished the outfit off with her new smart brown boots from Jones and this Next coat I got in the sale last year. It’s similar to her favourite Joules coat, but has a floral ditsy design, which is cute and girly and, crucially, a hood. If you’re going out for a long walk in the British weather, a hood is ALWAYS a good idea!