I’ve got an active bunch of kids who love nothing better than to be out running around or kicking a ball. But with the best will in the world, it’s not so easy in winter. They keep up with their regular clubs and classes, but, when it starts going dark as soon as they get in from school, there’s far less time for them to play outside and let off steam.

So you can imagine how pleased we were when we offered the chance to review the Kettler Junior Indoor Tennis Table. 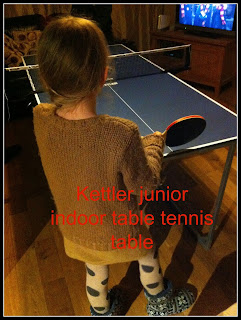 When my husband saw the big box, his heart sank because he imagined the massive construction job he’d have to do. So he was very pleasantly surprised to discover it was just in two halves and everything was built and ready to go. All we had to do was push the two halves together and construct the net – which took less than a minute. And we had a table tennis table all set up and ready to play. I was very impressed with the quality of it, it is very sturdy.

The table comes complete with two bats (or ‘paddles’ as my son informed me) and three balls. My son was particularly impressed with the bats paddles.

It arrived at a perfect time for us – for the first time ever we’ve got space to play inside! We’ve got room to play in our rented house and will have just as much space in our new house. This is important as it is most definitely an indoor table – keeping it in the garden or even a cold, damp garage will damage it. 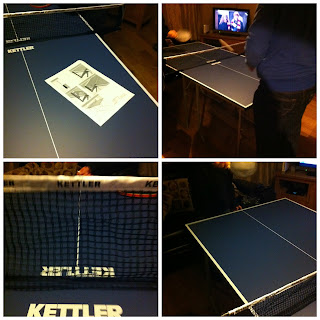 My younger son got started straight away. He did an after school table tennis club for a few months last year and seemed to know exactly what he was doing. Watching (and listening) to him playing against Daddy reminded me of Forrest Gump (‘I just played ping pong’).

I’m 40 years old and I’ve never played ping pong in my life. Sadly I played exactly like someone who had never played would play. But my son was happy to coach me and explain the rules. It’s going to take me a while to get the hang of it, but I really enjoyed trying.

When your session is over, it’s very easy to fold the table down and put it against a wall out of the way. I don’t think ours is going to stay out of the way for long though. I’ve got a real feeling the table tennis tabld is going to help get us through the long, dark winter.

The table costs around £159. If you’re still stuck for a present for an active school-age child and you’ve got a little bit of space, I would really recommend this.

We were given a Kettler Junior Indoor Table Tennis Table for the purpose of this review. All opinions are our own.