Jacket potatoes are one of my absolute favourite things to eat, whether I make them myself or eat them at my favourite coffee shop. (My younger son says Daddy makes much better ones than I do, that’s both true and another story.)

The only downside of jacket potatoes is they can be a little time-consuming to make – there certainly isn’t time after a day at work when I’m just feeling hungry and want to eat. Those of you of a certain age (old, like me) may remember when microwaves first came on the scene and everyone was saying how brilliant they were because you could make jacket potatoes really quickly.

Seriously?! Do you remember them? Does ANYONE make jacket potatoes in the microwave any more? Damp skin, not in the slightest bit crispy. And if the skin isn’t crispy, frankly it isn’t a jacket potato in my book!

But now McCain has launched Ready Baked Jackets. They’re PROPER jacket potatoes (they come in all shapes and sizes, just like any other potatoes), but you do them in the microwave! Genius! Now I can have jacket potatoes after work if I like. They cost £2 for four, which sounds like pretty good value to me, and they include timings on the box for doing one, two, three or four potatoes at a time, which is very helpful. 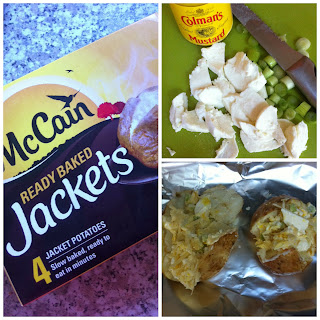 Now I would have been very happy to just eat them with cheese like I usually do, but those nice people at McCain were kind enough to send me a little recipe – and all of the ingredients to make it. Regular readers will know that cooking isn’t my strong point, but even I could manage to mix up a bit of cheese and spring onions and put it under the grill, right?

This serves two, but I *may* have just eaten it all myself. I’ve just started running stupidly long distances again and I totally needed it.

You do your two jackets in the microwave following the instructions.

In the meantime, you heat up your grill.

Grate the cheese and mix it together with all of the other ingredients.

Split the jackets, cover with the cheese mix and put them under the grill until they’re hot and bubbly.

Serve with a green salad. 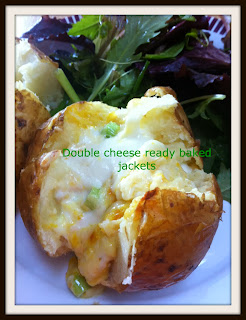 So how was it? Well the potatoes themselves were pretty good. Not the best jacket potatoes I’ve ever eaten, but far from the worst. The recipe was delicious – the mustard and spring onions just gave it the right amount of kick. This was  enhanced further by a green salad containing coriander – yum! Even my husband, who claims not to be fussy, but is not so keen on vegetarian food, thought they were delicious.

I won’t persuade the kids to try a recipe containing spring onions and mustard, but they are very happy to eat the potatoes with a mixture of cheeses. And my son reports that they are better than Mummy’s, although not quite as good as Daddy’s!

We were sent some McCain Ready Baked Jackets and the ingredients for the double cheese jackets for the purposes of this review. All opinions are our own.