In the last few days before Christmas, something unusual happened. I got bored. As my mum used to say when I was moaning as a kid ‘I wish I had time to be bored’. But, actually, it’s not all it’s cracked up to be. Frankly it’s a bit, well, BORING.

I’m not saying I always enjoy what I do, but constantly dropping kids off at activities, sorting school stuff out and putting washing away doesn’t leave me with any time to get bored. But then the school holidays started and reality kicked in. There was NOTHING TO DO.

Now if it was just me, I’d be quite happy. I’d just read a book. I reckon I could read all day, every day and never get bored. But it’s the kids too, particularly my daughter, who are bored. And if I’m reading, she’ll be even more bored.

When we moved into this rented house, we had 48 hours from finding out we were going to move to having to be out. We didn’t know how long we were going to be here (we hoped we’d be out before Christmas) and didn’t have time to think about what we’d need to amuse ourselves.

My daughter brought some pens, some books to read and her DS with one game, designed for younger children. I bought a pad of white paper and a pad of lined paper for them to share for homework and drawing. The boys have a handful of books which they are re-reading, the Wii and one game, which they have played to death and are now bored of. We found the DVD player after we’d been in the house for four weeks. But no DVDs to watch. The internet is non-existent and we have no recorded programmes, we can’t pause or rewind the telly and there is no CITV (my daughter’s favourite channel).

The boys hog the lounge with the Wii, CBBC and more grown up programmes and channels. And my daughter follows me around like a lost puppy.

She dances, she climbs on her bed and jumps off, she doodles and she chatters incessantly. She helps cook, wrap presents and write cards. All in a desperate bid to not be bored.

But in the end, it gets too much. We really are bored. There is nothing to do. I take some photos of her. They’re not as good I hoped. I put some more washing away, but it’s not drying fast enough. The kitchen doesn’t need tidying. It’s blowing a gale and pouring with biblical rain. And it’s dark anyway. We can’t go outside. 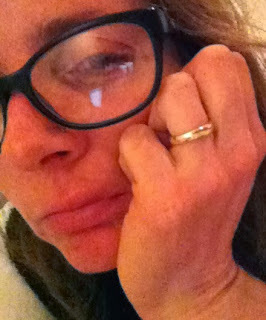