I finally found out that we were definitely moving house when I was at work late on Wednesday morning. Moving house YESTERDAY. That’s two days’ notice. Not a lot of time to clear out nine years of a life and move it somewhere else. Even if the somewhere else is only two doors down

Ever since we found out we were moving round the corner, everyone has said to us ‘Oh, you can just walk your stuff down the road’. Yeah, stuff like beds and wardrobes. And don’t even go there with our dining room table, which is like a lead weight. No, I’ve always maintained we will get people to pack for us and move for us

So at 9am on Thursday, three of the loudest, most cheerful blokes turned up to pack up my house. They put the radio on Absolute 90s and they sang at the top of their voices – the worst voices I’ve ever heard – and they packed our stuff.

Because I didn’t know exactly what we would be taking into the rented house and how long it would take to locate our stuff, I worked on packing enough clothes to get us all through three or four days – including all the football, rugby and dance stuff. My husband got all our pictures down off the walls and carried them round to my mum’s for safe storage. By 2pm our house was just a series of boxes. It felt like we were making good progress. 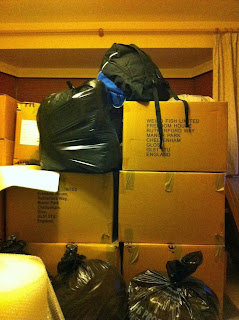 I thought my daughter, who had been quite upset about the temporary move situation, would freak when she saw it, but she loved it. It was like an adventure for her. As a bonus we got to have tea at McDonalds because all of our food had been packed.

As a treat for her last night, Daddy said my daughter could sleep in with us. This is something she’s always wanted to do and never has (although I always share with her if we go to a hotel). What a bad idea! She mumbled in her sleep, sat up and shouted and was constantly pulling the cover off, then we would pull it back up again and she would take it off again. At 3am I’d had enough and went to sleep on the remains of her bed. It felt quite strange as this was exactly how I’d spent my first night in the house all those years ago – in that very same room surrounded by boxes. I was awake at 5 and that was it. Moving day!

As my eldest was about to set off for school, I asked him if he’d said goodbye to the house.

‘What, aren’t we coming back here?’

Sometimes you have to wonder what goes on in tweens’ heads.

When he realised, he got quite emotional, poor kid. I felt sorry for him. It is a hard thing to do to say goodbye to a house you’ve lived in so long and been happy in.