I am honoured to be hosting the S2S2D bloghop today, in honour of our lovely blogging friend Emma at Crazy with Twins. The bloghop is the amazing idea of the blogging dream team of Verily Victoria Vocalises, Firefly Phil and Jaime at The Olivers Madhouse

Emma has been through radiotherapy in a bid to get rid of her cancer. Following this treatment she had to keep two metres from other people at all times. Original estimates were that this could be for up to 30 days for her 1 year old twins. So the blogging community got together to come up with 30 days of blogposts to help keep Emma smiling.

We were all so thrilled when the radiation left her body much quicker than expected and she was able to cuddle her children in a fraction of the time originally expected. So what to do? Abandon the bloghop?

NO! This thing had momentum, it had grown far bigger than anyone could have expected – did you see Emma on TV and in the papers? It’s a great way of getting messages out about cancer.

Emma first found her lump over two years ago. She ignored it for a long time. If she hadn’t ignored it for so long, her treatment would have been less upsetting. She still has a wait to find out if she has really been cured.

Although things have moved on much quicker than expected, I’ve decided to stick with the original funny post I had planned – The Journey. None of your metaphorical journey crap. Not Emma’s journey as a mother, a blogger or in fighting cancer. No, an ACTUAL journey. A journey Emma, me and Mummy Glitzer went on.

As we live near to each other and were both going to BlogSummit in Bristol in March, Emma offered me a lift. Oh, and we’d pick up Mummy Glitzer in Bristol on the way.

I arrived at Emma’s house on time as planned. She was running late. She left me in the car with her delightful daughter Bunny (who was totally un-phased by this strange lady in her car and sat chatting to me) and ran into the house to sort something out. Then it was off to take Bunny to school. The clock was ticking. The traffic was appalling.

Bunny arrived at school on time by the skin of her teeth. Emma had to pay for school dinners on her phone before we could set off. It was already 9am. Just an hour until BlogSummit. But that would be fine. Bristol’s not THAT far away.

The phone battery was low. It was plugged in and the satnav was on. We set off.

The traffic was bad. There were roadworks.

Time was ticking on.

We needed to pick up Mummy Glitzer. We knew she lived in St Pauls in Bristol. I just had to check Twitter on Emma’s phone as she was driving for the DM with her address.

Every time I touched the phone the screen went off. I had NO IDEA how to use that phone.

We came off the motorway and headed into St Pauls in Bristol. It was past 10 (start time). But only just.

I very helpfully DM’d Mummy Glitzer off my own phone to tell her we were on our way. So she left her hostel to wait outside for us.

Unfortunately, we didn’t have her address or phone number.

So we just drove around. But we had no idea where we were going.

So we did what anyone would do when they were lost – we asked a policeman! All we knew is that she lives in a hostel. Well he knew where there was a bail hostel. And a hostel for recovering alcoholics. Now we know Mummy Glitzer wasn’t living at The Ritz, but we didn’t think it was either of these.

So we drove round some more. Until Mummy Glitzer realised we were taking rather a long time and went inside to check Twitter.

We sneaked into the back of Blog Summit half an hour fashionably late. 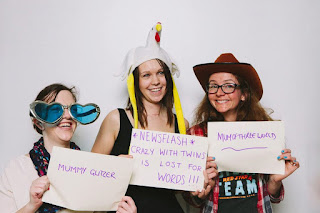 And then we did it all again on the way home…

Emma’s husband needed to set off for work at 4.30. So we left BlogSummit at 3.30. PLENTY of time to get home. Except we got stuck in a traffic jam coming out of Bristol. And we went the wrong way. Yes, Mummy Glitzer lives in Bristol, but she either walks or gets the bus, she’s not used to driving. We got horribly lost. AGAIN.

We dropped Mummy Glitzer off at 4.30 – the time Emma was supposed to be home so her husband could set off for work.We were no more than two miles from the conference venue we’d left an hour before.

Then it was back onto the motorway to drive home in bad weather, roadworks and heavy traffic, arriving well over an hour after we were supposed to.

The journey was a pleasure. I chatted to Emma and found out so much about her. She’s lived such a varied life for one so young (she’s only 27!).

Emma, I would be very happy to go on a journey with you again. But, next time, let’s get the train, eh?

Emma and I are running Race for Life in Cheltenham on 7th July. Click on the link if you’d like to find out more or sponsor one or other of us.

Please add your S2S2D posts to support Emma and put a smile on her face on the linky below. Thank you.