Yes, I worry. All of the time.

Although, to my credit, I still do the things that worry me. So I got on the plane to Barcelona and tomorrow I’m getting the train to London with people I’ve never met before, then getting the tube (I hate the tube – it’s claustrophobic) across London to Britmums Live. Later in the evening I’m going out for dinner with more people I’ve, you’ve guessed it, never met before.

June has been an amazing month – my husband’s 40th and going to see The Levellers then a trip to London and the MAD Blog Awards family day at Legoland Then to this week and Britmums Live and, the straw that broke the camel’s back, my dance show. (You can read about last year’s dance show here.) Now I love my dance show, and I’ve been looking forward to Britmums Live since I got my ticket almost a year ago. But when I saw they were on the same weekend, I was gutted.

I’m missing my dress rehearsal, I’m getting home late at night on Saturday, then I’m at the theatre early on Sunday morning. I’m leaving my husband, with a bit of help from my mum, to sort my daughter’s hair and make-up and get her to the theatre. Oh, and I still can’t get my dance routine in my head, despite going over it literally hundreds of times.

And I’m all tied up in knots. As an IBS sufferer, my worries always go straight to my stomach. For the last two days my stomach has been hurting so badly it feels like it is going to eat itself.

The rational part of me knows that I can prepare for the dance show before I set off for London, my husband is perfectly capable of sorting his own daughter’s hair and being at a theatre at 8am is no big deal because I’m always up at the crack of dawn anyway. And we’re talking approximately 24 beats I’m hazy on out of two whole dances. If I mess up slightly, does it really matter? Is it worth all the hours I’ve sweated away trying to get it right?

But you trying to telling that to my stomach. And the irrational part of my brain that kept me awake all last night.

So I’m going to do my nails and get to bed. And in the morning I’m going to catch the train and I’m going to put a smile on my face and leave all my worries behind.

I have nothing to worry about. I can’t let my worries spoil something I’ve looked forward to for so long.

If you’re going to Britmums, see you there! I’ll be the woman in the crocodile vest top. With a worried look on her face. 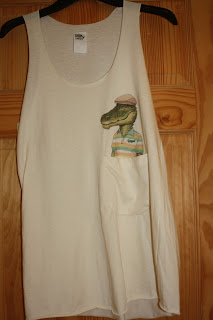