When I read a book, it’s always there at the back of my mind. It’s on the edge of my consciousness. I feel like I can grasp it, but not quite. It’s like half a memory. Sometimes I’m not even sure what is there, whether it’s something that’s happened to me.

But it’s the book. I’m thinking about it without even realising it. It’s affecting me and getting under my skin.

I’ve just read a very moving book – The Unlikely Pilgrimage of Harold Fry, about a man who, on a whim, sets off on a walk the length of England to see a friend who is very ill with cancer. He starts out alone. He meets people, he inspires people. People join him on his walk… 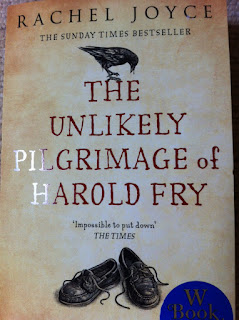 Then I realised. It sounded VERY familiar. Because right now Emma at Crazy with twins is going on a metophorical journey with cancer. She was alone. Alone in an isolation ward. But then she was joined by others – the bloggers, tweeters and social networkers, who are joining in with the S2S2D (Shoulder to Shoulder to Day) bloghop to keep her spirits up.

Like the books I read, Emma has been at the back of my mind (and often the front of it), on the edge of my consciousness, for a few weeks now.

Every Wednesday, Emma runs Wednesday Words, where people share words, lyrics, poetry or stories that have inspired them. This week, The Unlikely Pilgrimage of Harold Fry has inspired me. And it’s got me thinking about Emma.

There is so much I could reproduce here, but these are the bits which really hit me:

He couldn’t be sure, but he thought she gave a small sob. Then she said, ‘Well, you’re the news, Harold. You and Queenie Hennessy. You seem to be all over the place.’

From this point, others joined. They came for a day, maybe two. If it was sunny, there could be a crowd. Campaigners, ramblers, families, drop-outs, tourists, musicians. There were banners, camp fires, debates, physical warm-ups and music. People talked movingly about the loved ones they had lost to cancer; and also the things they regretted from their past. The greater the numbers, the slower they became. Not only must they accommodate the less experienced walker, but they must also feed them. There were roast potatoes, garlic on sticks, beetroot in foil. Rich had read a book about natural foraging and insisted on making hogweed fritters. The daily mileage dropped further. Sometimes it was no more than three.

Despite its slowness, the group seemed sure of itself in a way that was new to Harold. They told themselves thy were no longer an assortment of torsos and feet and heads and hearts but one single energy, bound by Queenie Hennessy. The walk had been inside himself for so long that when other people pledged their belief in it he was touched. More. He knew it could work. If he had known before, he knew it now in a deeper way. They put up tents, unrolled sleeping bags and slept beneath the sky. They promised Queenie would live.

‘Queenie is still alive, Harold. You asked for her to wait and you see, she is waiting. Rex and I checked the weather forecast and they have slapped happy sun shapes all over the United Kingdom. You’ll feel better in the morning.’

She didn’t hear, or if she heard she wouldn’t allowd the gravity of what he was saying. Her voice kept coming at him, rising in pitch: ‘Keep walking. It’s only 16 more miles to Berwick. You can do it, Harold. Remember to stay on the B6525.’

All words are taken from The Unlikely Pilgrimage of Harold Fry by Rachel Joyce. I hope you enjoyed them and hope they perhaps even brought a tear to your eye, like they did to mine.

I’m linking this with Wednesday Words at Crazy with Twins and also as part of the awesome #S2S2D bloghop to keep Emma’s spirits up while she is unable to touch her children.