Things they don’t tell you…

When I was 19, I had my nose pierced. My mum and dad were disappointed for about 30 seconds and then they were fine with it. To such an extent that my dad would stand at the chopping board in the kitchen chopping the ends off my nose studs with a knife to make them more comfortable.

“When you sign up to be a parent, they don’t tell you that 19 years later you’ll be chopping up nose rings,” he said.

Well, here’s some more things they don’t tell you… (And I’m not talking weaning, potty training, sleepless nights and projectile vomiting, because, actually, they do tell you about those.)

That after doing your main weekly hoovering on a Friday, you will have to hoover again on Saturday and Sunday because the family brings half a football pitch into the house on Saturday and half a rugby pitch on Sunday.

That you have to wash gum shields. 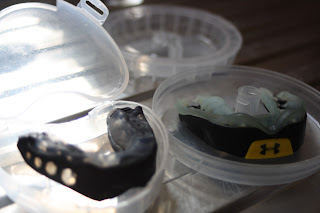 That you have to wash up a muddy, mouldy, mossy (?) seaside bucket because your daughter needs it for ballet class.

That somewhere along the line someone would decide it would be a good idea to store the hoover in the airing cupboard. Underneath half the world’s supply of football and rugby boots.

That you would become frightened of foreign travel because your children won’t eat abroad. Or even drink.

That 15 seconds after telling your 11 year old son to do something that is ‘not dangerous, stupid or irritating’ you would find him scraping away at a golf tee. With a pen-knife. In his lap.

That you would ever have a need for the phrase ‘why is there a little torch on a shoelace in the middle of the kitchen floor?’.

So what have you found out about parenting that they didn’t tell you?