My younger son, for all his incredible intelligence and maturity, has always had lovely childlike qualities. He’s less in a hurry to grow up than his brother and has always been happy to be a little boy (despite the fact that he is so tall he comes up to my nose!).

Maybe it’s down to their place in the family, maybe it’s because he’s so bright he feels he has nothing to prove or maybe it’s down to when they were born… My eldest is one of the youngest in his school year and my younger son one of the oldest, so it stands to reason that my eldest would always be trying to keep up, while my younger son would have to hold back a bit. My younger son’s best friend, also highly intelligent, is a whole nine months younger than him and could easily pass for his little brother.

One of the ways this childlike innocence has always manifested itself is through his clothes. I wrote a little bit about that a few months ago. He’s alwas liked bright colours – red, bright green and, above all, yellow No navy, no brown, no khaki.

As the seasons change (in theory at least!) all the kids needed a few new clothes for the spring and summer, so we went shopping. We picked up the sorts of things he usually likes to help him choose  bright blue, bright green… and then he said it.

This made me incredibly sad. Sadder than it ought to. It’s a sign of him growing up, but it’s also a part of what made him who he is. The clothes he wore weren’t just little boys’ clothes, they were more than that. They really were very bright. They made him stand out – from his brother and from other boys. They made him unique. He already stands out by being so big and strong-looking, but the clothes were something else, they enhanced him, made him into the larger than life character we know and love.

And he doesn’t want them any more.

I don’t know when it started, it’s obviously happened gradually, without us really noticing. I suspect it was with a navy hoodie a friend bought him for Christmas. He loves that hoodie and he’s worn it to death. Suddenly everything seems to fit in with that hoodie. If he hadn’t had the hoodie, would he have changed anyway? I suppose he would. If not now, then soon enough.

When we went to the Malverns recently, he looked more like his old self – red Tshirt and yellow hoodie. And I realised I actually hadn’t seen him looking like that for quite a while.

My little boy is growing up. 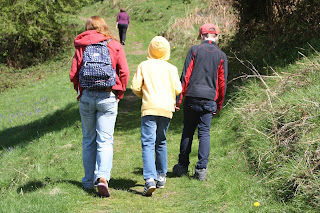