When I saw that this week’s Gallery theme was happy I knew exactly what I was going to write about it. It was one of those ordinary days in the Easter holidays, that somehow turned out better than an ordinary day should. And I felt an (unusual) overwhelming sense of happiness all day. And, even better, so did the kids.

I woke excited. This was the day my eldest and my husband were setting off to Snowdon (more on that another time). And, to make it even more amazing, they were taking my son’s best friend They hadn’t seen each other for six months and I was so excited for them. Would they still be best friends? I felt they probably would. My son’s friend is too nice to change just because he lives over 100 miles away and goes to a different school.

Added to this was (I admit) a certain amount of excitement for me at being a single parent of the two younger kids for just over 24 hours. They are both such a delight to be with, and taking one child out of the equation always makes a huge difference to whichever two are left.

Then they set off and it was just me and my two little ones. I took the two of them to the park, along with my younger son’s friend to play football. As we arrived, we saw a kite. Then we realised my daughter’s friend was flying it. My daughter ran over to her friend and he happily handed her the kite to fly without her even asking. She wasn’t sure how to fly a kite, so I helped her. Then I was flying the kite.

The sun was shining and it was the best feeling in the world. The kids were running around chasing the kite like excited dogs. They took it in turns to fly it and to launch it. The football was completely forgotten. The sun was shining for the first time in weeks. They were having the best time. 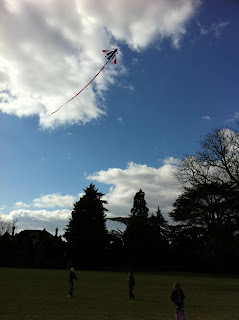 But they wanted ice cream. They had it in their heads the ice cream van would be there, even though I told them it wouldn’t. The sun was shining, but the wind was still cold. So I did them a deal. Don’t mention the ice cream again and I ‘might’ think about it for later.

We had tea at a local cafe, just the three of us. But no ice cream. Then I told them we were off.

But what about the ice cream?

I had a plan. We walked the five minute alonside the dual carriageway from one retail park to the other (not exactly a beautiful walk, but still) and went to McDonalds for a a McFlurry.

As we walked back along that windy dual carriageway and they ate their ice creams, my son said ‘This is the best day ever.’

And do you know what? I kind of agreed with him. It was such a simple pleasure, but we were all so happy.

This post was written in response to a prompt from Sticky Fingers. Pop over to see how others have interpreted the theme ‘happy’.