The day I posted about my son’s abdominal migraine things took a turn for the worse. It went from something which had been bothering him intermittently for a few days to something which made him feel really ill.

To be honest, I don’t know if we were still talking about an abdominal migraine here or something else, but all I knew was I had a very unhappy boy. His tummy was very painful, he had to rush to the toilet and he often sat on the toilet crying. He was crying from the pain and from the uncertainty. He’s not used to being ill (despite the flu and the broken legs over Christmas). He didn’t know what was wrong with him and he just didn’t feel well. He hated having to rush to the toilet, he felt in some way ashamed, even though I reassured him it was horrible, but fine. He didn’t like being alone in there, so I sat with him until he started to feel well enough to come out.

I already had a doctor’s appointment booked for the next day and it couldn’t come soon enough. We were both desperate for this all to be at an end.

He went to bed and slept all night, but woke up early and was straight into the toilet.

He has stayed hungry the whole time, and carried on eating, although he is losing weight rather rapidly and looking very thin.

I took him to the doctor and she agreed with the view that it wasn’t a bug, it was something peculiar to him which had just come on. She needed to find out what it was and how to deal with it. We’re looking at something like coeliac disease or a dairy intolerance. Unfortunately for my son, this is not a quick process.

He had a blood test – which he hated, but he was very good about. He’s scared of blood, so I had to try to keep his eyes averted from the little bottles of blood that had been removed from his arm. It was only after we’d left the surgery that he asked what those little bottles of ‘black stuff’ were. Blood looks darker and so much more concentrated in a little bottle then when you cut yourself. I’m so glad he didn’t realise what they were when we were there.

He also did a wee test – several hours later. My boy doesn’t wee on demand and seems to have the most incredible bladder capacity. Plus of course he was probably a bit dehydrated anyway.

And we have to keep a food and symptom diary. Days have to be rated out of 10, with 10 being a brilliant day with no symptoms and one being a day when he’s so bad he can’t go to school. 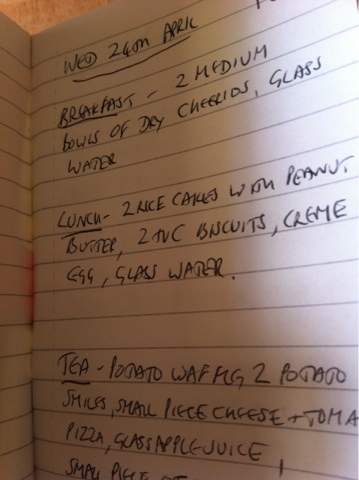 We shouldn’t exclude any foods, because if we do, how can we tell what is causing his problems? We have been avoiding milk for a few days because that seemed to be connected. But then his symptoms carried on without him having milk.

In the spirit of not excluding any foods, my son bravely ate chocolate twice that day. And he paid for it. It may have been a coincidence, who knows?

So whatever the doctor said, I decided we were going to exclude foods on day 2, just until his stomach had settled a bit. So we excluded chocolate and dairy. This left us with dry cereals and a lot of Tuc biscuits. He’d eaten six Tuc biscuits when I started to wonder whether that wasn’t a bad idea. So by teatime on day 2 it was wheat free pasta with a bit of ham.

I really hoped he would be back at school today, but it’s day 3 and he’s still off. This has been going on for over a week now in total.

Hopefully we will get the results of the tests in the next few days. We are supposed to keep the food and symptom diary for three or four weeks.

I am keeping my fingers firmly crossed that his symptoms will have eased before then or we are going to have a very weak boy. He needs to go to school and he needs to play sport. He doesn’t need to be a slave to the toilet, underweight, hungry and living on rice cakes and dry cereal.