What she wore – New posh coat

Home » What She Wore » What she wore – New posh coat

I’ve said before that my daughter is remarkably naive about money – if she has money, she doesn’t worry about spending it all in one go and is then happy to save for weeks or months until she spends again. If you’re not careful, she will give it all to her brothers or charity.

She got some money for her birthday, and liked the idea of a new dress from Joules, which is one of our favourite places to buy clothes for her, even if they are rather pricey. She walked in, ignored the dresses and picked up a pink coat.

‘This is the sort of coat I like, with no hood,’ she announced. She then went on to describe in great detail exactly why she liked this coat. It was clear she’d given it a lot of thought. 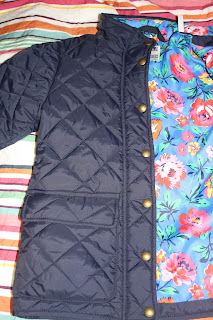 Lining detail of the coat

And then she saw it in navy. The pink one was forgotten. Following the choice of Converse over Lelli Kellys this is another clear sign she is growing up fast.

She wasn’t interested in dresses or pink. She wanted that coat and was happy to spend all of her birthday money on it. She liked it so much, she even wore it to walk out of the shop.

It was one of those ridiculously cold March days where it snowed. Here she is wearing that coat for the first time. 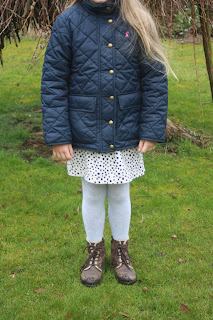 Underneath it, she’s got her very favourite H&M dog jumper dress and she’s wearing it with soft grey tights, also from H&M, and her trusty old Clarks brown boots, which have kept her warm and dry for two winters.
She also wore it with this cheerful bobble hat from Accesorize. 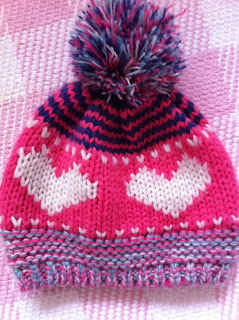