To celebrate my daughter’s birthday this week, I am looking back and remembering her as a baby and the time she forgot to grow.

My daughter was 8lb and half an ounce when she was born, a sturdy, solid looking little thing. She grew at a normal rate for the first few weeks, hitting 10lb at six weeks (her biggest brother was 10 weeks before he hit these dizzy heights, although my younger son was only two weeks). 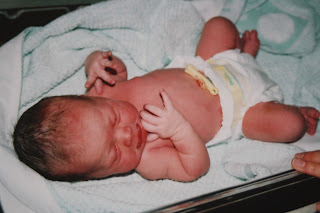 Minutes from birth, a solid 8lb baby girl
I always fed my babies on demand from birth, with my eldest in particular feeding up to 11 or 12 times a day as a newborn, and still feeding on demand right until I went back to work when he was six months old. But when my daughter was a few weeks old, I realised I couldn’t feed on demand. Because she had to fit round the school run.
So I slotted her into a routine which worked for us. She had her first feed about 6am, then another at 9am when we got back from school, a lunchtime feed around 11.30 and another feed at 2.30 before we picked my son up from school. Then she had a teatime feed and a bedtime feed and usually one feed in the night.
But the 9am feed went on a bit long and the 11.30 feed came round a bit quick, so I dropped the 9am feed and just fed her at 11 instead. Then, at eight weeks, she started sleeping through. Suddenly she was only having five feeds a day. At the age of just eight weeks it didn’t seem right, but I figured she must be getting enough because she was sleeping through.
I was a bit disappointed at nine weeks when she only weighed 10lb 13 and a half ounces. But nowhere near as disappointed as I was at 14 weeks when she only weighed 10lb and 14 ounces. In five weeks she’d only put on half an ounce. Suddenly the little girl who’d been on the 75th centile at birth was down to below the 9th.
The little monkey was so peaceful and calm, she’d conned me into thinking she was having enough milk when she was clearly having nowhere near enough. ﻿
She might have been happily sleeping through, but she wasn’t drinking enough to make her grow. So I reinstated the 9am feed and also added a bottle at 10.30pm. She put on eight ounces in the next two months.
﻿ Aged 3 months and she’s forgotten to grow
I was so glad my little girl was growing again. Her growth started to follow the line, hovering between the 9th and 25th centile. She wasn’t a big girl, but she was growing at a steady pace. To look at her now, you would never guess that once upon a time she’d forgotten to grow. 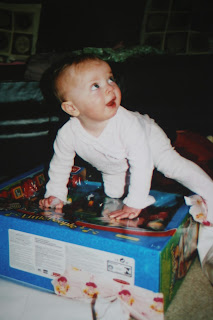 On her 1st birthday and still tiny at 19lb