Is it Just Me? by Miranda Hart

Home » Book Reviews » Is it Just Me? by Miranda Hart

I’ll let you into a secret. Until very recently, I’d never watched Miranda. I’d seen her on other programmes and she seemed a likeable, funny enough kind of person, but I’d never watched her programme. I’d heard it divided opinion – people either loved it or found it rather irritating. I suspected I would fall into the latter category.

But my kids recorded an episode over Christmas (then didn’t get round to watching it until we had failed to record the next three episodes), we watched it, and I LOVED it. Yes, it was a bit slapstick, but it was right up my street. You can’t beat a bit of old-enough-to-know-better self-deprecating female humour. In my opinion. Sadly, I have still only seen three episodes, but one day I will catch up.

So I thought I’d have a read of a book. And it’s pretty much like her TV show.

It’s not exactly an autobiography, although it draws heavily on her life. It’s more snippets of things she has an opinion on, illustrated (both in actual pictures and metaphorically) by incidents from her accident-prone, embarassing life.

I’ll be honest, I was a little bit irritated at first. It uses the device of ‘Little Miranda’ – her 18 year old self who pops up to sneer at how embarassingly she has grown up. But once I’d got over that, I found it very, very funny. Plus I could relate to a lot of it.

The tales of life in an office had me laughing out loud. Because it’s like life in my office. Yes, life in an office can be dull. So you make your own entertainment and it’s anything but dull. It’s just about the best place in the world to be.

As Miranda says: I’d say that 90 per cent of my doubled-over-gasping-with-laughter-so-much-that-you-can’t-breathe-amd-think-you-might-die laughing has occurred during slow days in offices.

If you like Miranda, or reading about people embarassing themselves in every scenario imaginable, you will enjoy this book. If you prefer a bit of heavy literature, you might want to steer clear. 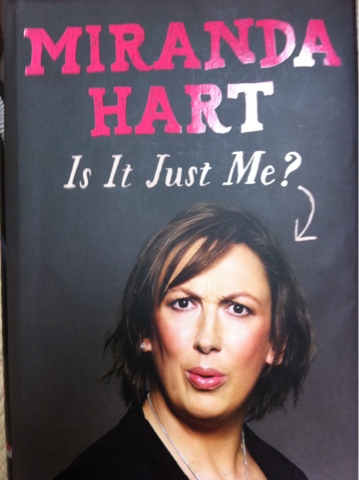