When the kids were younger, I used to dread the school holidays. All that time stuck with the kids. What would I do with them? How would we make it through the day?

But now I love the school holidays. We don’t do anything. And that’s the best bit about it. Doing nothing equals no pressure equals a happy family. And after a few weeks at school we all need that.

The school holidays aren’t just a break from school. They’re a break from Cubs, Scouts, Rainbows and dancing. And a break from work for me. Not a complete break, I don’t have a bottomless pit of annual leave but I get to take at least some of the time off.

So we get up a bit later. They watch the telly or play on the Wii. They get dressed between 9 and 10. But they don’t go to bed later. In fact, without the coming in late from activities thing, my daughter gets to bed earlier. Which is a good thing. 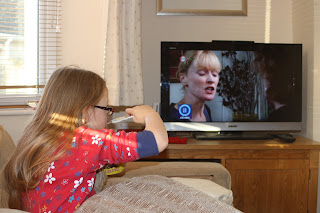 And then we go out for a walk. It might be a practical walk to the shops, or it might just be a walk for the sake of exercise and fresh air. It clears the head, fills the lungs with lovely cool air and lets them run off a bit of steam. Or they can scoot off a bit of steam if they prefer.

We go to the cinema. We go swimming. We even do a bit of homework. How mean am I?

Two days of this is all it takes for me to see a really positive change in my family.

Because I’ve been struggling with my eldest lately. He seems to make less and less sense to me. He’s distancing himself from the rest of us. I try to talk to him, but I get nothing back. He doesn’t want to engage. Or he can’t. When he speaks it’s a mumble. It’s hard to tell what he’s saying.

Unless it’s something about how ‘rubbish’ year 2 is and how ‘babyish’ something my daughter has done is and how he can do so much better. I can hear him loud and clear then.

The digs at his sister, and even his brother, are almost constant. And I don’t know what to do with him.

It turns out all he needs is to watch telly while he eats his breakfast, get dressed later and go for a walk with his family.

He’s started having conversations and making sense. He’s started speaking clearly. And he’s stopped having a go at his brother and sister.

There’s obviously a whole other, bigger story there for me to unravel about why he behaves the way he does and what I can do to help him through it. But right now, I’m just grateful that half term has given us a break and given me my boy back.