There’s been only one type of adventure to have over the last few days – a snowy one! 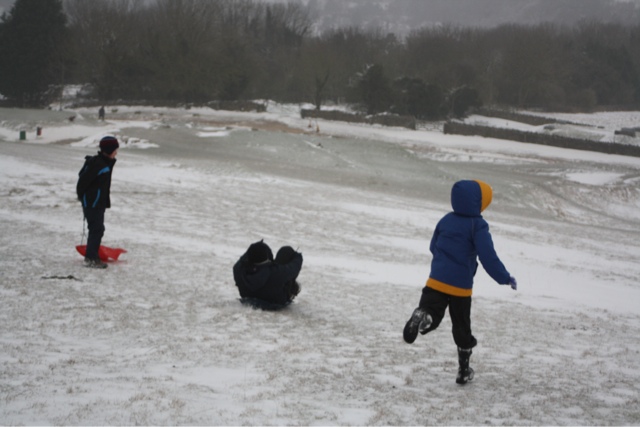 On the day it snowed, the kids and me went to some small hills in the village for sledging. They sledged, rolled down hills and threw snowballs at every other kid in the village. And I got very cold feet.

But that wasn’t good enough for us. We needed more. Bigger, higher, faster. Snowier.

There’s some hills a few miles away that EVERYONE in town goes to when it snows. So we went up there early on Saturday to beat the rush – when the hills would be swarming with hundreds of families throwing themselves down the slopes.

It’s always cold there – even when it’s boiling hot and sunny everywhere else. We wrapped up WARM. We had so many layers on, I lost count. We headed for our usual car park, then realised we wouldn’t make it. It was way too slippy. We pulled in and walked the last bit – nearly slipping over as soon as we got out of the car.

Up on the hilll the snow was DEEP. To the top of my welllies. 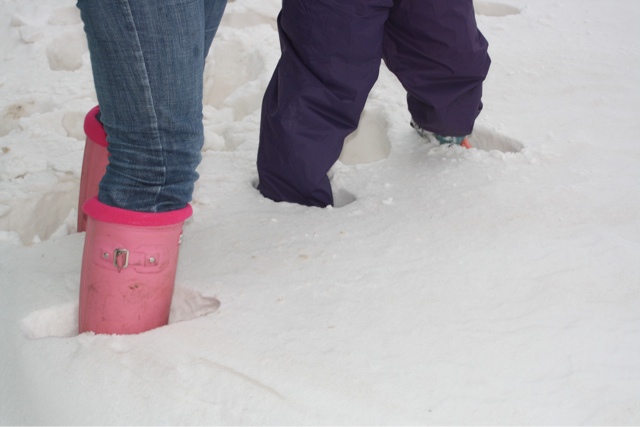 It was well over the top of my girl’s wellies

‘We need to get a photo!’ says my husband. Followed by ‘You didn’t bring the real camera? I can’t believe you brought the camera up here!’

One hundred and two photos later…

It was very cold, the coldest I’d ever known it up there. I didn’t think we would survive long. But once we got moving, the cold was soon forgotten. The snow had drifted. It had filled up little basins in the hills and in other parts it was just a sprinkling. A very icy sprinkling. Perfect for plastic sledges to go sliding across.

We chose long slopes – not too steep – and the boys started sledging.

It terrified me at first seeing my younger son going down the hill seemingly at 100 miles an hour, flat on his front. It brought back memories of myself aged 11, sledging on the same hill, with the sledge going out of control and me desperate to fall off, but not having the sense to just make myself fall off. The sledge went over the side of a quarry. Luckily I grabbed on and was fine. My mum and dad were terrified of what they were going to find. 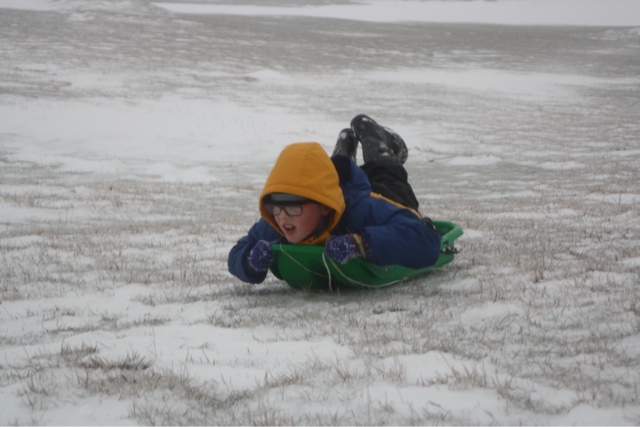 My son hit a bump, we all screamed at him to jump off. He carried on sledging until the sledge came to an abrupt halt and threw him into some very deep snow. He was fine. And he loved it.

Pretty soon my eldest was moaning about wet, cold feet. He had frostbite. Obviously.

He hadn’t done his walking boots up, they’d filled with snow and it had melted and soaked through his socks. He wanted to go home. We weren’t going anywhere, so he had to go and sit in the car on his own.

My daughter got braver and braver with the sledging. And so did I. It was great fun.

My son and husband had a very long race. They were both lying on their fronts and heading straight for some sort of sign thing to do with the golf course (I have no idea what it is actually for). They missed it by a whisker and carried on sledging. It looked scary, but brilliant.

I wondered if I could have a go. Not on my front of course.

I walked up the hill with my son. It was a long way and quite exhausting going uphill and trudging through snow. He told me I had to go on my front. Well, what was the worst that could happen? We weren’t near that quarry. There was just that golf sign thing.

When I was younger I liked doing things that were a bit dangerous, liked that feeling of exhiliration. But since having children I’ve been pretty risk averse. My main two aims in life are a) to keep my kids alive and b) to keep myself alive. Because who else would look after them if I wasn’t here?! Clearly going on an upside down ride at Alton Towers or going on an aeroplane isn’t going to kill us, but there’s a little part of me that still worries it might.

So we set off on our race. I hit some thick snow and fell straight off. Typical mummy. 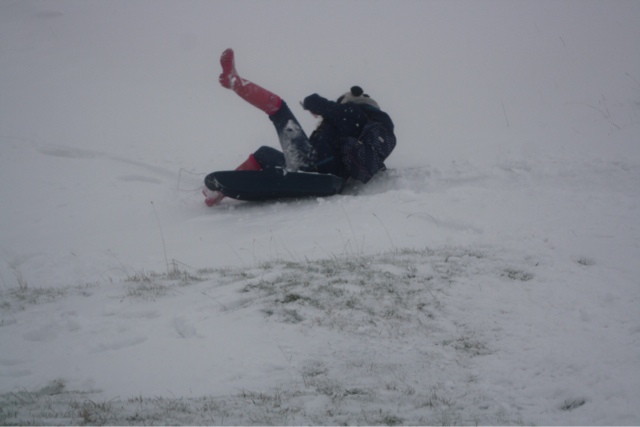 My son was miles ahead. I got back on – and I went fast. Really, really fast. It was amazing. I hit a bump, I went up in the air, I landed and the sledge kept on moving. I was screaming and laughing. I beat my son by miles. I absolutely loved it. 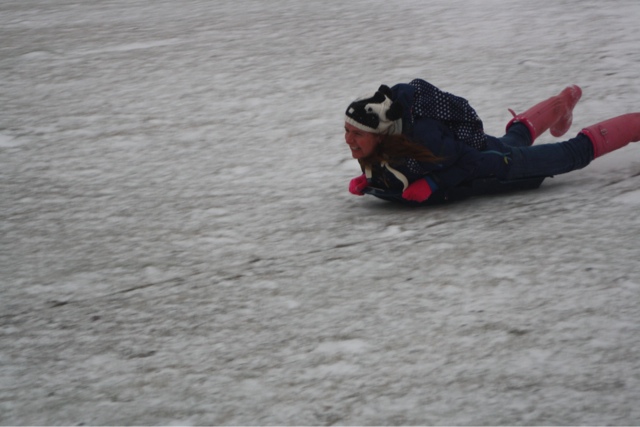 Excitement, terror or both?!

It was such an adventure that everyone agreed we had to go back the next day. So we did. And we broke all three of our sledges.

I am writing this post in response to The Gallery over at Sticky Fingers. Pop over to see how other people have interpreted the theme ‘adventure’.