My daughter is nearly 7. She is gorgeous and cute and adorable. She is my baby.

I’m aware I treat her differently to the way I treated my sons when they were nearly 7. Because she’s the youngest and that’s just what you do with the youngest. I hope I don’t treat her younger than she is, I don’t think I do. I used to laugh at parents lifting 7 and 8 year olds out of the car and carrying them into the house or who sat their 7 and 8 year olds in booster seats (not booster cushions) in the car like pre-school kids. But now I get it. My girl is my baby. She’s a lot bigger than a real baby. She’s clever and funny and independent and good at whatever she tries to do. But she’s still my baby. (Although she’s had a booster CUSHION for well over a year.)

So I find myself picking her up without realising. She likes me to pick her up out of bed in the morning and lift her into bed at night and I like doing it – even though she’s getting really heavy.

My eldest probably hasn’t been lifted into or out of bed since he came out of a cot, poor kid. Yet strangely in many ways he is far less independent than his sister.

I like to buy her clothes that look like little girls’ clothes, not mini teenagers’ clothes. Clothes that a toddler could also wear. Sadly now she’s grown out of all the little girl ranges and is in the ranges that go up to 12. Or 16.

But I realised it’s not just her. There’s a scale and it applies to my younger son too to a lesser extent.

My younger son is 9. He’s almost as big as his brother and is so clever and funny and good at sport. He seems so much older than his years. But he’s my little boy.

When my eldest was 9 I bought him his first Superdry. I LOVE Superdry for myself and was keen for my son to wear it too. Buying it for my son felt like a rite of passage. My boy was growing up. It was a cap because the Tshirts were too big. The ladies’ extra small would have fitted him, but they were clearly ladies’ Tshirts. Not a good look on a 9 year old boy. When he was just 10 he got a Superdry shirt – a ladies’ extra small, but you can’t tell it’s a ladies’.

I wouldn’t dream of buying my younger son Superdry. Because, despite his incredible maturity and intelligence, he seems too young. When I see kids of his age wearing Superdry I think they are way too young for it. Although it was fine for my own son two years previously.

When I shop for clothes for my younger son I look for yellow things and Angry Birds and Lego. Because he’s a little boy. That’s what he likes. 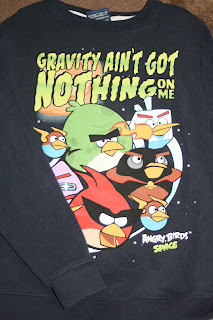 Like his sister, he’s growing up at his own pace. Being mature or intelligent doesn’t mean you have to leave childish things behind or dress like a teenager.

What do you think? Do we as parents make our kids grow up soon? Do we treat younger children differently from older children? Does society force our kids to grow up too fast?