An alien in a green swimming hat

Home » An alien in a green swimming hat

This year my daughter’s Christmas play, nativity if you like, was Christmas with the Aliens. Turns out this has been a pretty popular play this year, I’ve noticed a lot of other people on Twitter saying their kids have done it too. Plus lots of ‘why can’t they just do normal nativities?!’ rants.

My daughter wanted a speaking part. Hey, she DESERVED a speaking part. The parts were dished out last thing on a Friday afternoon. But the scripts weren’t. She came out of school and said: “I’m Alien 3” with a bit of a frown.

What was that all about?! Cue lots of mentions of the Love Actually lobster on Twitter.

I could see she was a bit stressed about the whole three thing. And to be honest, I was a bit too. She was going to be thinking about it all weekend. So we had to find a teacher to check exactly what Alien 3 entailed. It was definitely a speaking part. Phew!

When the script arrived it turns out Alien 3 was a pretty big speaking part – as big a part as can be in a 10 page play with 32 speaking parts and a cast of 120 kids from Years 1 and 2.

So we kitted her out in a pair of green tights with the feet cut off (health and safety), an old polo shirt of her brother’s (which had blue stripes) and her own special input… her green swimming hat. 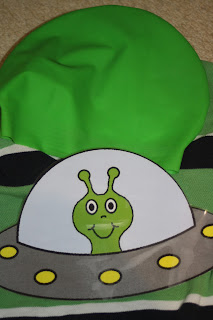 The only thing the aliens all had in common was a spaceship/ alien picture pinned to their Tshirts/ onesies and green face paint. Only one alien had a green swimming hat on. My beautiful daughter wasn’t half as beautiful with her hair all gone, a swimming hat on and her face covered in green. Frankly, if it wasn’t for her glasses, I wouldn’t have recognised her. And for that, I salute her, because my daughter likes to look beautiful.

It turns out the play was closer to a traditional nativity than any I’ve seen for many years. The aliens crash-landed and then they basically watched some kids perform their nativity. Which was traditional. Mary and Joseph even had speaking parts. Mary and Joseph normally just fade into the background in the kids’ nativities.

So the aliens watched the play and occassionally said something – like about how they could take flying lessons from the angels. That was my daughter’s funny line and some annoying parent coughed all over it. Thanks for that. Just because it’s not YOUR kid speaking… Grrr.

My daughter looked a bit grumpy sat with all the aliens, although her lips were moving along with everyone else’s lines. Most of the aliens were fidgeting and pulling faces. There was also a remarkable number of kids coming onto the stage picking their noses. A couple of the Year 1s had to be pulled out because they were crying. But at least no-one was sick. That’s always a bonus.

After the show, I asked her why she’d looked grumpy.

‘My swimming hat was hurting my head.’

Suffering for her art at only 6. Fair play to her.