Are We Nearly There Yet? by Ben Hatch

Home » Book Reviews » Are We Nearly There Yet? by Ben Hatch

I first became aware of Are We Nearly There Yet? when the author, Ben Hatch,started following me on Twitter. Yep, he followed ME.
The book sounded amazing and right up my street – a family with two small childrendoing an 8,000 mile trip around Britain over five months in a small car. What’snot to love/ cringe about/ laugh at?! It’s the stuff of nightmares, quite frankly. Regular readers will know just how bad our family is at travelling, sothe idea of doing it for five months just doesn’t bear thinking about.
You,and I, will be pleased to know that their experiences were every bit as disastrous and funny as ours – from Daddy’s bad stomach right at the very startof the book, through car sickness, a dramatic car crash and lost shoes to aVERY unusual use of a toothbrush.
Ilove the conversations between the kids and the parents, particularly daughterPhoebe, who reminds me a lot of my own daughter, being clever, bossy andclearly wrapped round her Daddy’s little finger. Stuff like this: ‘So the cars were going whoosh and Mummy was running after Charlie and that’s when she trod in my poo. And got it all over her ‘spensive shoes. It was very foolish, Daddy, because she didn’t notice the poo on her ‘spensive shoes so she got it all over the petals (sic) in the car.’
There were some sad times too, particularly Ben’s father’s illness and death during their time on the road. He writes about this honestly and beautifully and it had me in tears.
What really comes through is not just the comedy, but the family’s love for each other. It might sound like a recipe for disaster, but what better way to bond with your children and get to know them better? The family had a unique opportunity and they made the most of it.
I also loved the fact that I knew so many of the places they were travelling to and could picture them clearly. They stopped in my home county of Gloucestershire right at the start, there was a period in Nottingham and the surrounding area (I went to university in Nottingham) and they stayed in a house in my sister-in-law’s village in Cheshire.
My husband doesn’t read. Ever. I think he would enjoy this book. I tried to persuade him to read it on the way to our holiday to Padstow. I was pretty near the end of the book then.
‘So does he go to Cornwall?’
‘I haven’t got to the Cornwall bit yet.’
We arrived in Padstow and I started reading and he was in… Padstow. Magical.
The book ended with Phoebe’s first day at school – they got home to Brighton the day before she started and managed to buy her uniform in Padstow. Where from?! Kids don’t usually wear ‘Lifeguard’ hoodies with their names on for school.
A brilliant book, which I would recommend to anyone who has ever spent time inthe car with kids – that’s all of us, right?! 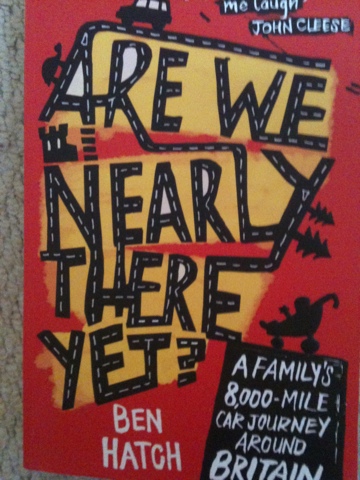