The Flood part 6 – Getting back to normal

Home » Family » The Flood part 6 – Getting back to normal

And so it went on. For the first few days, I was carried through on adrenaline. But it started to get a bit much.

Although we were reusing clothes which would normally go in the wash, we were starting to run out. And the whole boiling water thing and washing up by hand started becoming a hassle. The novelty of greasy ponytails was wearing off.

I was desperate for some water!

On Sunday, a week after the first water went off, we went for a drive. We went in search of water. We drove to the first town with water and looked for a launderette. We found queues, but no launderette. We drove to the nearest motorway services in search of a shower. There was a male shower, but not a female one. So Daddy and the boys got clean and I got more down. Apparently it was a really grotty shower, though.

It was probably the next day that water started coming through some taps in the county – ours were a day later, if memory serves me correctly. This was not drinking water. This was strictly toilet, clothes washing and bathing water.Teeth cleaning was still to be done with the bowser or bottled water. And babies under 18 months weren’t to be bathed in it. My girl was 16 months at the time, so no bath for her!

The drinking water didn’t really bother me – we had bottled water coming out of our ears. It was just great to feel clean again and to be able to wash the clothes.

Another three days and the water was drinkable! But only when boiled – for cups of tea and stuff.

The free water was still being dished out in the supermarket car parks, but people were being a bit more discerning in what they took. They were thinking ahead to picnics and only taking the 500ml bottles which they were clearly planning to stash away. It’s fair to say most families had huge quantities of 500ml bottles for months after it was all over.

And finally – two weeks after our water had gone off, 17 days for some people – we had proper drinking water coming out of the taps! 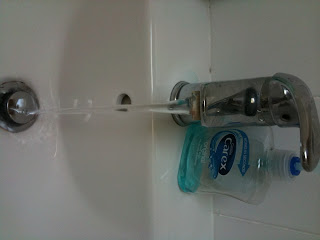 It had been a crazy time and it had taught me some valuable lessons. I will never waste water. To this day, when I rinse a bottle for recycling or drain a pan of pasta, I will always do it over a dirty pan or bowl to rinse it at the sametime. (And, don’t tell anyone, but I don’t always flush the toilet after a no1 when I’m at home. It’s the environmentally friendly thing to do. If you’d seen how much water it took to flush a toilet and physically carried it through the village yourself, you would probably do the same.)

Water, water everywhere. And not a drop to drink.