The Flood part 5 – The bowsers

Continuing my story of Gloucestershire’s summer emergency of July 2007…

On Tuesday morning, I got up, turned on the tap, it glugged and… nothing came out. Our water really was off. I was calm about it now. I’d had two days to prepare.

We still had the water in the bath for toilet flushing etc. We even discovered a water butt in our garden we didn’t know was there, which we also used for flushing the toilet. I’d stocked up at Sainsbury’s the previous day on big 5 litre bottles of water. It’s amazing how quickly commercial companies can cash in on a crisis. They had crates and crates at the front of the store with a man shouting ‘Have you got your water?’ and loading up people’s trollies for them.

There was talk of ‘bowsers’. That was a new word for us all, but it became the most-used word in our vocabulary for a few days. Bowsers are tanks of water. They were putting them out in Gloucester for people to get water. Apparently there weren’t enough of them. Apparently people were taking too much. Apparently there was fighting and arguing at the bowsers.

Our first bowser arrived on Tuesday afternoon. It was warm and sunny and me and the kids walked down with my mum and dad to get our water. It felt very exciting – almost a party atmosphere at the bowser. 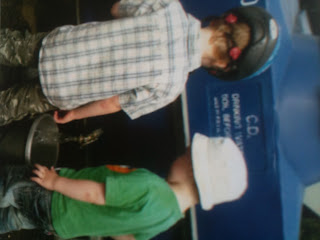 Our very first trip to the bowser

Pretty soon there was free bottled water available everywhere with volunteers giving it out in supermarket car parks. And pretty soon we had four or five bowsers in the village. There was no fighting, nobody taking too much. It was all very amicable.

And so we settled down to a new reality. I got up, boiled some bowser water in a pan on the hob and tipped it in the sink to cool ready for washing up.

When everyone was dressed we would take our higgledy-piggledy collection of used plastic bottles to collect more water. Yes, we took more than most people, but we had more people who needed it than most households. We used the bowser water for washing up, cooking and washing ourselves.

Washing ourselves became rare. Every other day I would stand in the shower cubicle with a pan of cooled, boiled water and a pan of cold and wash myself as best I could. Hairwashes were once every four days at best. It didn’t matter. Everyone was in the same boat. Everyone at work and on the street was sporting greasy, scraped back hair.

The toilet was flushed with the bath water or the water butt water. When I drained food I would drain it into the toilet flushing water. Not a drop was wasted. The toilet was only flushed when, er, necessary. I don’t need to spell out when that was.