Back in the saddle

Home » Family » Back in the saddle

I love running and have been running since just before my 21st birthday, sometime back in Victorian times. I have pretty much been running non-stop since then, apart from pregnancies and early days of breastfeeding.

Until last autumn. When I got an INJURY. I don’t get injuries, the same as I don’t get ill. I’d done the Bristol half marathon with no problems at all, then two weeks later I was out on a five mile run (which is like a walk in the park when you’re used to half marathons) and something just stopped. It was like there was some sort of concrete block pressing on the outside of my left knee and it was saying ‘don’t run, you can’t run’. So I walked and it was fine. I tried to run again. Nope, it was having none of it. So I walked again. Fine. Ran again. Not fine. Admitted defeat and rang my husband to come and pick me up.

And then nothing, so five days later, I went running again and after a mile and a bit, the knee said, no, I’m not running any more. And when I didn’t run it was fine. So I left it another week and, you guessed it. Computer, well, knee, says no.

This was serious. I left it four weeks. Surely it would be OK now? But it wasn’t.

The annoying thing to me, although actually it was a good thing, was that it only hurt when I was running. I was fine walking and dancing and standing and sitting. I just couldn’t run. And for a runner, that is really annoying.

I started walking instead of running, but much as I like walking, it just wasn’t the same. I even tried cycling, but I’m really crap at that. I cycle at about the same speed as I run – and I’m sure I’m supposed to be a lot faster.

This went on all through the autumn and into the winter. I had a lot on mind with changes and work and Christmas coming up and I felt down. Yes, work was getting me down, but I have no doubt that being unable to run was making it worse.

I knew I had to get it sorted, if only to cheer myself up. I knew the NHS wasn’t the answer. Who is going to give physio to a fit, healthy middle-aged, middle-class woman who JUST CAN’T RUN. It’s a luxury, isn’t it? I don’t need to run. But I kind of do.

I never make New Year’s Resolutions, but I made one this year – to get my knee sorted. And on 5th January, I went to a private physio. She was surprised that it only hurt when I was running, although it had started hurting a little bit at other times too by this stage. She concluded it was the ITB – the something which I can never remember tibial band. Which my husband had diagnosed me with several months earlier.

She gave me some exercises to do and told me to go back in a week. So I did. And she said I was ready to run. Already! I was so excited.

Then I went for three miles, then five. And everything was fine. I dropped some of the exercises and just did them every other day rather than every day.

But could I do a half marathon? It’s less than three months until the Bristol half marathon – time to sign up, it’s now or never.

As it costs over £30, I decided the sensible thing would be to test myself before forking out the money, then attempting a training run and realising I couldn’t do it.

So I went for an eight mile run. And I did it! No knee pain, no nothing pain. I could have probably carried on for another five miles and done the half marathon there and then. I came home and signed up for Bristol.

I am well and truly back in the saddle! Apologies in advance if I become a running bore over the coming months. I will try my best no to. 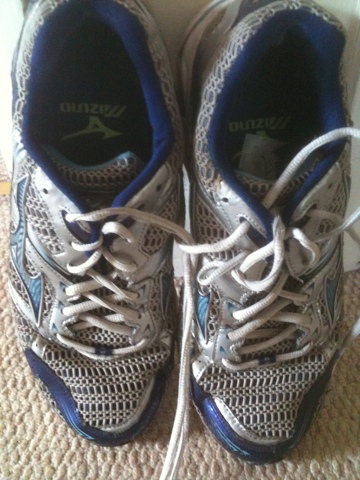