My younger son is highly intelligent and very good at sport. We thought he could do everything. But now we’ve found the thing he can’t do. He can’t rollerskate.

When the kids came home from school with a flier for a roller disco, the younger two said they wanted to go. My daughter bought rollerskates with her own money and practiced. Only when we were all satisfied she could do it, did we apply for tickets for the roller disco. We didn’t give my son a thought. Because he’s superman. He can do anything.

After about half an hour, he’d had enough. He lurched over to me, red-faced, sweaty and crying and announced he wasn’t doing it any more. He’d hit the back of his head as he fell, stumbled as he tried to get up and hit the front of his head. His head was aching, he was hot and distressed.

I took him into the cafe for a drink and to cool down and calm down. I offered him Calpol for the headache. But he wanted to walk home. I wasn’t sure. I like a walk as much as the next person, more probably, and it was a lovely sunny day… But he was in a state and I wasn’t sure he needed a walk. There wasn’t much point – it would take us half an hour to walk and the roller disco would be finished in half an hour and we could go home in the car. But he insisted.

So we walked. And it was a brilliant decision. As soon as he got outside, he perked up. He calmed down and went back to his normal, happy self. Of all my children, he is the one who gets hurt most, who reacts most to things like being too hot or too thirsty, but he also bounces back the quickest.

The mile and a half walk takes us through a pleasant suburban area. It’s not far from home, but we never walk that way. We whizz through in the car. So everything was new and exciting and different for him.

The constant rain for a month meant the weeds were knee high. My son has loved dandelion clocks since he was a toddler, so he picked them excitedly all the way home. Sometimes we had one each to blow and it was a competition to finish it first. Sometimes we took it in turns to blow the same one until all the seeds were gone.

He went into a patch of tall buttercups and picked a couple. He confirmed I like butter (which I don’t), then confirmed a tree liked it too. Then he explained to me the real reason why it goes yellow under your chin – that the sunlight is reflected in the buttercup. It’s nothing to do with butter.

He spotted an unusual insect – a sort of beetle, maybe. It was red and ‘awesome’. He inspected it very carefully, followed it as it crawled along a wall, then caught it on his buttercup. Then he dropped it, picked it up again in his buttercup and made me take a photograph of it – because it was so awesome.

Then he stopped in sheer excitement. ‘Whoa! Look at that!’ What was I looking at? It was a field. On a hill. With the tracks of a tractor clearly visible. Very ordinary, but he’s never seen it from the path, only rushing by in the car.

The end of our walk took us through the park. We ‘just’ had to tread on daisies all the way across it. We trod on a lot. It was probably possible to only tread on them, there were certainly a lot of daisies, but I think it may have taken us an hour or so and we would have had to walk a REALLY long way round the park.

As we got home he announced ‘I like walking home’. So do, I thought.

Then four minutes later, my husband and daughter got home in the car. 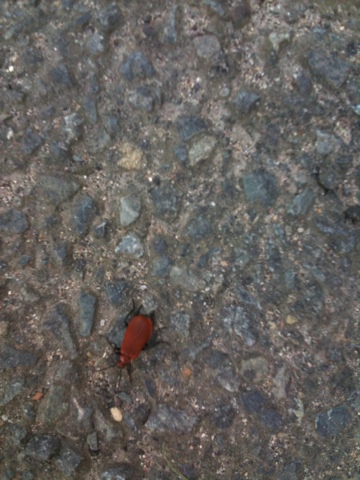