Number 1 son, the one who never usually gets ill, has man flu for the fourth time this year. And he is laying it on a bit thick. He is also at school because I don’t have time for people whinging about sore throats and blocked noses. It’s a COLD. Get over it.

As far as I’m concerned, a cold isn’t ill.

A cold is irritating, you don’t feel 100%, but you’re not ill. Ill is a temperature or throwing up, not a slightly sore throat.

So when I get out of the shower at 10.15 at night, wanting to go to bed and feeling fed up that I still have washing to put away, the last thing I want to see is my son telling me his nose is blocked and he can’t get to sleep. So I put some Karvol (amazing stuff!) on his pillow and tell him to get to sleep. Because if there’s one thing that can elevate this from mere cold to actual illness, it’s lack of sleep.

When I get home from work, he is making mournful croaky noises and pulling sad faces. He’s not well enough to go to his swimming lesson, apparently. That would be the swimming lesson he hates and tries to get out of every week. When my back is turned (but my ears are still switched on), he is well enough to shout at his sister and wind her up.

To reinforce his case that he is VERY ILL, he informs me that his TA said he was coughing a lot. I know he’s coughing a lot, but if kids stayed off school every time they coughed, there would be a lot of very empty schools and very bored teachers.

Ironically though, when the man flu is combined with actual illness symptoms he keeps saying ‘I’m fine’ every time I ask if he’s OK.

Man flu dose number two was again accompanied by a temperature and he was still ‘fine’. Luckily he was well enough to enjoy Easter with Grandma, Grandpa, his auntie and uncle and me while Daddy took the other two out for the day. No wonder he was ‘fine’ – the company of adults without the other two around is like a dream come true for him.

So here we are at bout number four – coughing, croaking and most definitely not feeling ‘fine’. With an unsympathetic mummy who can’t be doing with people moaning about colds.

Or man flu. Get over it. 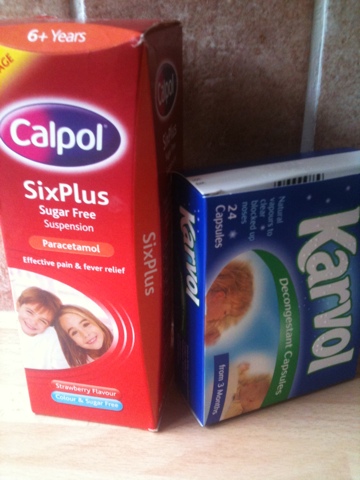