The honest answer is, I don’t know. All I know about is my own experiences. And this is what I’ve found.

I took a decision before my boys were even born that I wasn’t going to buy them guns and swords. It was a decision I stuck with until about 18 months ago, when I allowed them to have Nerf guns. And I think it was the right decision. I know parents who have given their boys guns and swords from a very early age because they are ‘boys’ toys’ – and those boys are aggressive. Maybe it’s a coincidence, who knows?

My boys fight each other, but my daughter fights them too. My boys aren’t that aggressive. (Although any parents of girls who have seen them fighting outside Rainbows would probably not agree with me.) The way I see it is boys have natural aggression (you can’t gender-neutralise the testosterone rush at age 4 because it’s a scientific fact), so why make them worse by giving them aggressive toys?

Both boys had a lot of kitchen toys when they were were little. They weren’t forced on them by me. They chose them. My younger son had a toy Henry hoover at the age of 5 and I know of at least one man who questioned that and raised an eyebrow. Why? At the same age my younger son also had a lot of Littlest Pet Shop VIPs – big, cuddly Littlest Pet Shop toys. He liked cuddly toys and these were cute. He didn’t know that they were ‘girls’ toys’ and I wasn’t going to spoil it for him by telling him.

Yet on the whole it is probably my eldest who has the more ‘girly’ interests – he is more likely to read, is interested in history and likes collecting things.

My younger son is either running round crazily or on his computer (when I let him!) – both quite ‘boyish’ activities. But he has very clear ideas on what he should wear, unlike his brother who couldn’t care less.

Both boys are quite sensitive and always have been. My eldest has always been very caring and understanding. All a bit ‘girly’? Or something to be proud of? I think the latter.

So they both have ‘male’ and ‘female’ attributes. And they are both different. They are not ‘typical boys’.

My girl is happiest when she’s drawing and colouring – quite a typical girl thing. She loves pink, pretty dresses and dancing. But she also loves running fast and riding her bike. Does she like them ‘naturally’, did she learn to love them or did I influence her?

As a mum who already had two boys, I can’t say for definite that I didn’t encourage her to like pink and dancing. Because in a male-dominated household, it’s a nice break for both of us. But I can say that I have always fought against things which are pink for pink’s sake – stuff like pink Pritt Sticks – why?! And I won’t put up with things which are overly fluffy and glittery. That’s probably the sense I have gained from living in a male-dominated household.

I’ve talked recently about how my girl has got a bit stroppy lately. Parents of girls roll their eyes knowingly at this ‘typical girl’ behaviour. Many say their girls have been behaving like this since they were a year old. So I’m feeling quite lucky.

Why did their girls behave like this from such a young age? Why has my girl only just started? Is it natural (like the boys’ testosterone rush), or did she learn it from girls at school?

As I said, I don’t have the answers. All I know is, I have three children who are very different from each other. Some elements of their character are ‘typical’ and others aren’t. They are individuals and that’s what makes them special. I would love to hear about others’ experiences. 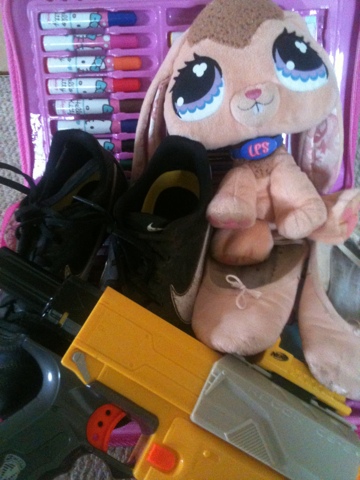