We’re having a little trip to London this holiday. I love London.

I lived there for a couple of years in my early 20s and I suppose I didn’t love it all that much at the time. I didn’t like the way everything was so busy, the way every journey took forever and was a military operation and the way Londoners didn’t realise there was a better way! There was life outside London and it was EASIER. Less busy, less pressured, less pretentious.

But what I did like was being in the centre of things. Being where everything was happening. I liked being able to go to gigs after work without travelling to Birmingham. And I loved the shops. Top Shop Oxford Circus will always have a very special place in my heart.

Now we’re ‘old’ and have a family we rarely go to London. (Well, my husband actually goes nearly every week for work.) Frankly, it’s a bit too much hassle. And when we do go, we do that traditional touristy thing that everyone outside London does and everyone living in London laughs at. We go to a show. My husband and I have been to a few shows on our own – travelling there and back in the day, of course. Last year we took the kids to see Wizard of Oz, which was amazing. My daughter woke up on the morning of the show and said she’d had a dream that she met Danielle (the winner of the TV search for a Dorothy). And then she did. It was quite magical.

The reason we’re going this time is because I have a real urge to see the Olympic stadium and Olympic village. I don’t know how much we will actually be able to see. But we’re going to see it anyway. We’ve got a hotel right by the stadium (at bargain price!). And there’s an amazing new shopping centre too.

We applied for Olympic tickets, but ‘only’ got football tickets. The football will be great, but it’s at Manchester and Cardiff (I think), so it’s not going to feel quite like the Olympics. So I need to go and see it now.

We looked into going to a show too, but, guess what? It’s really blimmin’ expensive. Frankly we could have a (admittedly VERY cheap) holiday for what we would pay for five of us to go to see The Lion King.

So we’re going on Duck Tours instead! I’ve fancied Duck Tours ever since it was first started. I think I saw Rowland Rivron and his family testing it out for some programme on telly and it looked the best thing since sliced bread.

So I’m very excited. The kids are pretty excited too. They’ve all got Olympic Tshirts to wear. Now I just have to get organised and packed. Oh, and my eldest, the one who never gets ill needs to get over the mystery illness he is currently suffering from.

Travelling isn’t our strong point, so keep your fingers crossed for us – half-decent weather, no travel sickness, no accidents and NO LOSING STUFF. I’ll let you know how we get on. 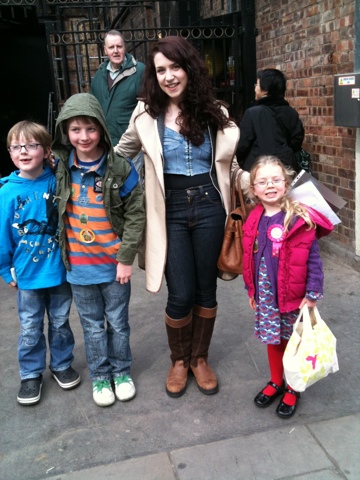