I love my daughter’s clothes. I like her to look like a little girl – a bit traditional, a bit cute, a bit boho. Pink is good, as long as it’s not bubble gum. Lilac is a no-no. Anything too grown up or tarty is a BIG no-no.

I thought my daughter and I were on the same page, but maybe not.

She recently told me very enthusiastically about a gold and black dress a girl in her class had worn to a party. GOLD AND BLACK. There were sequins involved. It wasn’t pink and cotton and floral.

‘But it wasn’t as nice as your pink dress, was it?’

Give me strength. If I have my way, the colours gold and black won’t be featuring in her wardrobe until she’s at least 21. (Yeah, I know, I won’t have my way.)

My girl has had this obsession with skirts for a while. She’s never really had a skirt. I don’t see the point. I can see the point in dresses (for her, not for me) and trousers, but skirts? What are skirts all about? Anyway, she really, really wanted a skirt, so I asked my sister to get her one for her birthday. She bought her this lovely cotton, sticky-out skirt with a print of houses and children and all sorts of summery stuff in white, pink and green.

Even though the weather has taken a turn for the worse, she couldn’t wait any longer to wear the skirt. I suggested she wear it with the rabbit Tshirt I got her, with a long-sleeved pink Tshirt underneath for warmth. It looked cool and cute. Until she tucked it in.

I don’t claim to be an expert in fashion, but I think if you live your life by the simple rule Never Tuck Anything In you can’t go far wrong. It works for everyone – ladies, men, girls, boys… But not my 6 year old, apparently.

I told her she had to untuck it. She looked, as my mum would have said to me, ‘like a bag of muck tied up in the middle’. But she went mad – shouting and crying. ‘But you can’t see THIS!’ ‘This’ being a pink bow at the top of the skirt. Never mind that the poor rabbit had his feet and half his body cut off. I got Daddy on board, who totally agreed with me, but she was having none of it.

So she went out looking like a bag of muck tied up in the middle wearing a poor rabbit with his feet cut off.

When I mentioned this on Facebook, strangely the two people to ‘like’ it were two people who have 100% girls. Obviously they know something I don’t. Looks like I’m about to learn…

Later the same day I persuaded her to change out of the skirt to go to the park. It would be terrible to get it stained on its very first day.

So she put the belt on the jeans and… tucked her Tshirts in. Not only did it look dreadful, but it also meant her trousers were too tight.

But, no, the belt had to be SEEN. She couldn’t understand it was a functional item – not even really required in this instance. So we had more tears. Then yet more tears when her Tshirts stuck out of the bottom of her cardigan.

Give me strength! She’s only 6, for goodness sake. 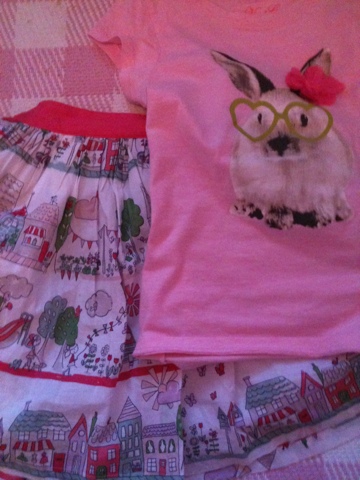