There is nothing brings out my maternal instinct more than when my children are hurt. When I see them in pain, all I want is to envelop them in my body to keep them safe. I want to dry their tears, clean their wounds, apply antiseptic cream and plasters, give them drinks and food and wrap them up in warm, dry clothes. I want to make them better.

And with kids that do sport, that maternal instinct kicks in an awful lot.

My younger son plays football and rugby. He throws himself in to the toughest tackles, at 100mph. He is fast and strong and wants to get the ball. He wants to support his team-mates. He wants to win. He has no concern for his own safety. He gets injured A LOT.

Tears at rugby aren’t unusual. Even in a training session, I would expect to see two or three boys in tears. And for a game, the stakes are much higher. The commitment is greater, the pain more intense and the tears are frequent. Why do we put them through that every week?!

My boy is nothing special or unusual. He is not a cry-baby. Plenty of times he goes down, it looks painful, but he bounces back and is up and running in seconds. So when he cries, I know he’s hurt. And I really want to make it all go away for him.

Over the last few days, he’s really been through it. Poor kid. But he still goes back for more.

At football last week, he was tackled by an adult. Why was the adult playing? Why was he tackling 8 year olds? I don’t know, but it won’t happen again. He fell over, the adult fell on top of him and his nose hit the ground. Hard. There was blood. My boy really doesn’t like blood.

I didn’t see the injury happen, but my boy came home distressed with a nose full of blood. We couldn’t touch the nose. It was too painful. More than a week later, it still is. And his breathing is more like sniffing than actual breathing. The doctor says it’s not broken, but there is almost certainly some cartilage damage. It may fix itself, or it may not. If it doesn’t, he will probably need an operation.

In the meantime, he is free to keep playing football and rugby and get injured some more.

This weekend was his biggest rugby competition to date – the County Cup. In the first game, he slipped as he was scoring a try. He grazed and bruised his thigh and hobbled off the pitch in tears to his Mummy. At least the try was allowed.

In the second game, he fell and was kicked in the head. He got a hand to his head, but not quite quick enough. The stud beat him to it.

Seeing your child in pain on the ground is so hard. Your first instinct is always to run to them. When my little boy is hurt, he needs me. More than the other two kids, who will make do with either Mummy or Daddy. And I need him. I need to make it better. But I have to stand there and wait for the referee to call the coach over, the coach to pick him up, order a substitute onto the pitch and bring my boy to me.

A cuddle, a walk up and down the touchline, a few mouthfuls of water and a few tears and he is feeling better.

He makes it through the third game uninjured, but in the fourth game he suddenly clasps his throat and starts crying. This time he says he can’t breathe. My husband is getting fed up. What does he mean he can’t breathe? He should stop crying and get on and play. But he has an injured nose, which is affecting his breathing anyway, he has a cold which will affect it further, and he has been playing rugby for a long time and is tired. Maybe he really is struggling to breathe?! 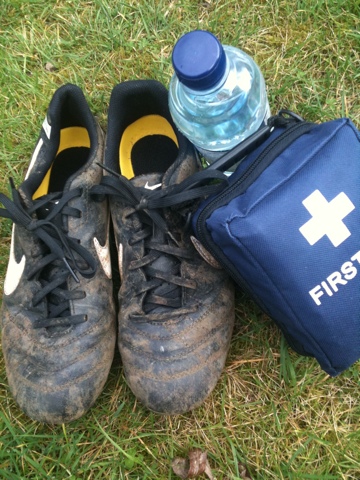